Ellen Page is great but miscast

Ellen Page‘s Juno performance is highly likable and sympathetic. You’re with her from the get-go because of her indefatigable spunk and pizazz. But the first time I saw Juno (at the Toronto Film Festival), I had a thought that wouldn’t leave me alone. It’s going to sound a little oddball but here it is. My first thought was “how and why did Page’s character get pregnant?” 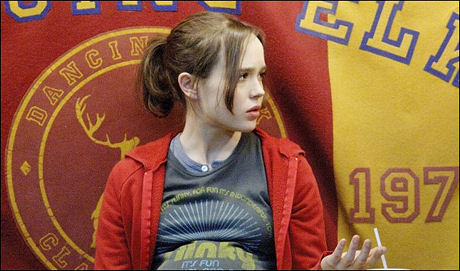 More to the point, why did director Jason Reitman cast an actress based on her sass and spirit, but with no regard for the fact that in the real world a young woman who looks like Page — midget-sized, scrawny, looking like a feisty 11 year-old with absolutely nothing about her that says “alluring breeding-age female” — most likely wouldn’t exactly be fighting off the attentions of hormonally-crazed teenage boys, including nice-guy dweebs like Michael Cera‘s character?

Unfortunate pregnancies happen to young girls of all shapes and sizes — obviously, sadly — but I kept saying to myself (and I’m writing this having once been 16 and 17 years old) that Page is the super-bright girl you want for a good friend — someone you can talk to at 12:30 ayem on a school night when you’re depressed or in trouble or enthusing over a band you just heard. But she’s not what any teenaged boy would call a hot package. She’s got the soul and the wit and the attitude of a Dorothy Parker (and the value that comes with such a person is priceless), but Juno is about an accidental breeder, and certain qualities need to be evident for this to happen in most circumstances.

Every time I’ve seen a too-young pregnant girl in real life I’ve quietly remarked to myself for this or that reason, “Too bad, but I can sorta see how that happened.” I’m just saying it didn’t quite calculate when I first laid eyes on Page. I’ve been sitting on this impression for three months now, and didn’t express it because I knew people would call me a dog. But it’s a fair thing to say, I think. Page is great on her own, but she doesn’t seem right for the role. Or rather, she’s right in every way except physically.