There is lingering irony in Cristian Mungiu‘s 4 Months, 3 Weeks and 2 Days having today won the Best Picture and Best Director trophy at the 20th annual European Film Awards. I’m referring, of course, to the reported “definitely mixed” reactions to the film among an Academy foreign film screening committee that happened a month ago. 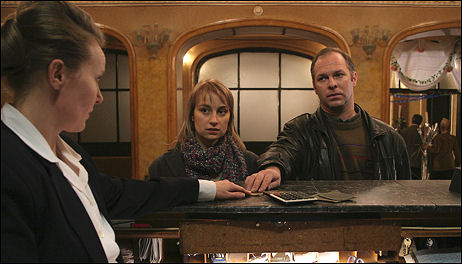 A journalist-critic friend told me a little more than two weeks ago that the Roumanian film “may not even make the short list,” that some committee folk had complained it’s “too slow” and that others “didn’t like the fetus on the floor shot” and so on. Some felt otherwise, but there was generally a strongly split reaction.

It’ll almost be thrilling if the naysayers manage to block Mungiu’s Palme d’Or winner from becoming one of the five nominees for Best Foreign-Language Film. They have a reputation to uphold, after all. So what if there’s a slight difference of opinion from other parties, other countries? Isn’t it better to be “full of passionate intensity” (in the William Butler Yeats sense of the term) than to reconsider a position or give ground?