I missed this idea from Ironicsan’s David Friedman when it was first posted on 12.4.06, but it’s a seriously cool idea that Tokyo’s city fathers should absolutely run with: “The people of Tokyo should construct a giant building shaped like Godzilla. Imagine what it would do to the city’s skyline, and to the tourism industry. People would come from all over to take pictures. 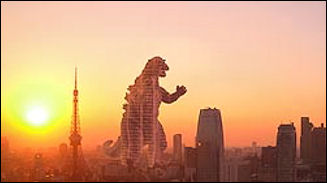 “His eyes could flash red so airplanes don’t hit him. There could be an observatory in his mouth so people could look out over Tokyo. One of his arms could house a bar, and the other arm a restaurant. They could serve drinks called Mothra Martinis and dishes like Grilled Gamera Steaks, with a side of mashed potatoes.
“And conversations could take place like this one (translated from Japanese):
“‘Hey, I just got a new job!’
“‘Oh, really? Where do you work?’
“‘You know the Godzilla Building? I’m just a couple blocks south of there.’ 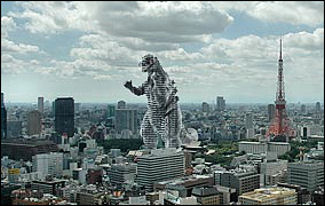 “Or maybe it could be partially residential. And then people could talk about that famous artist who used to live in the Godzilla Building in the apartment right above Godzilla’s left nipple. And then they could argue over whether or not Godzilla even has nipples.”
Of course, being a reptile, he doesn’t.