Judd Apatow‘s benevolent hand hasn’t exactly been bitten by Knocked Up costar Katherine Heigl, but it’s certainly been nipped. In an interview in January’s Vanity Fair, Heigl says “it was hard for me to love [Apatow’s] movie” because it’s “a little sexist…it paints the women as shrews, as humorless and uptight, and it paints the men as goofy, fun-loving guys.” 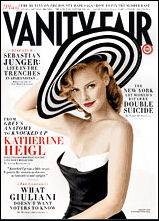 No one would argue that Knocked Up‘s attitude isn’t on the guy-skewing side, and yes, Heigl and female costar Leslie Mann, who plays Paul Rudd‘s unsatisfied wife, do come off as a little scolding. But every comedy needs “straight men” to bounce the humor off of, and that’s their function — to ask for a little maturity and sensitivity from men who are reluctant, to say the least, to provide this. At first, anyway.

This is an old gripe, but given Seth Rogen‘s slacker-stoner constitution the issue isn’t so much Heigl’s character being uptight and humorless as much as her credibility-straining decision, no matter how many shots of tequila she’s downed, to go horizontal with Rogen in the first place. There were 12 year-old kids watching Knocked Up in Kabul who found this incomprehensible.

As a result of Knocked Up‘s success, Heighl’s asking price reportedly went from $300,000 to $6 million, so I guess she can stomach her aesthetic disappointment.