I didn’t have to see I Am Legend (Warner Bros., 12.14) to presume that serious problems would pop through. The guiding hand of director Francis Lawrence (who gave us the loathsome Constantine after directing music videos for Britney Spears, Jennifer Lopez and Janet Jackson) told me almost everything I needed to know months ago. Add Will Smith‘s almost-deranged-need-to-charm-and- be-loved impulse, which pops up in every film he makes (even The Pursuit of Happyness), and the badness, to me, was all but assured. 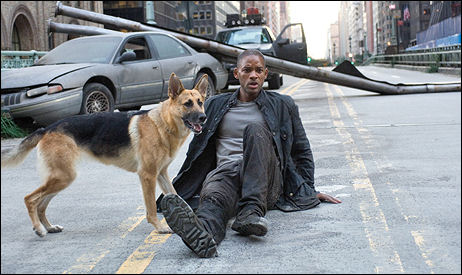 And now the first-hand dings from people who’ve actually seen it are coming in. The first was from Red Carpet District‘s Kris Tapley, writing this morning that he “mingled with Anne Thompson long enough to exchange unpleasant opinions on I Am Legend” at last night’s Sweeney Todd premiere.

The second air-rifle pellet came from Coming Soon‘s Edward Douglas: “After much-better variations on the apocalyptic premise like Children of Men and 28 Days Later, I Am Legend seems like little more than retread. Combining the poor choice of Will Smith in the lead role with some of the worst CG work since Van Helsing, this dog makes the recent The Invasion come across like a masterpiece.”

I didn’t use the term “pellet” thoughtlessly. I Am Legend has a rhinoceros hide as far as critical barbs will be concerned. The want-to-see is through the roof, the movie will pull down tens of millions on opening weekend, the public hass no taste, nothing matters, etc.