Several I Am Legend video clips, available on Yahoo.com, present the case better than any review: the dozens upon dozens of images of an evacuated and wasted Manhattan, overgrown with weeds and tall grass and populated with wild deer and the occasional lion and littered with rotting cars and buses, are worth the price of admission in themselves. 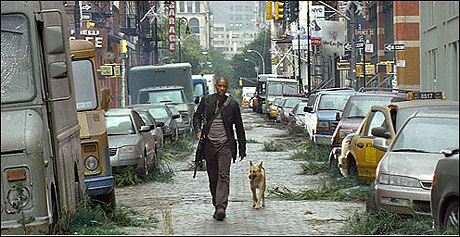 I’m a fool for CG fakery when it’s this good, and each and every shot of post- apocalyptic desolation in this film — the pastoral still-life stuff, I mean — is as good as it gets these days. I believed it. I was there. Hats off to production designers David Lazan and Naomi Shohan, art directors William Ladd Skinner and Patricia Woodbridge and the various CG supervisors from Sony Picture Imageworks, New Deal Studios and CIS Hollywood.

In this respect I Am Legend is very nearly the equal of Alfonso Cuaron‘s Children of Men, and that’s saying something.

It’s too bad that the biological movement stuff — especially the CG “deer” and the nocturnal ghouls — aren’t up to snuff. In fact, forget the ghouls entirely. They’re cartoon dreadful. One look at these fiends and you’re out of the movie and thinking about checking your e-mails. It’s hard to tell who did what, but the bad guys in this respect, apparently, are senior character animators Tom Bruno Jr. and Stephen A. Buckley.

Why didn’t director Francis Lawrence just hire a first-rate ghoul makeup team and go the Tom Savini route? The person responsible for the CG ghouls — the person who said “don’t hire actors” — is an idiot. He doesn’t understand the Werner Herzog rule that movies are worthless if they encourage you to be cynical about what you see. Anyone who knows anything about visual effects is going to mutter “bad CG” when the Legend ghouls appear. They aren’t in the least bit scary because they’re not in the least bit convincing.

CG animals are also a big problem these days. The only poor aspect of Beowulf were the CG horses. You can tell from the first Legend clip that the deer are way too hard-drivey. They move too fast, can’t really “see” them, don’t seem biological.

The live human aspect of I Am Legend — the “story” about scientist Will Smith and his dog (a German shepherd) roaming around Manhattan as he tries to solve the mutant problem from his home-base laboratory — isn’t a huge problem. I found it slightly better than passable. It doesn’t go off the rails until the final act, and Smith seems much less concerned than usual about the audience loving him this time. He’s just “there” and working it — focused on survival, not being stupid, dug in, unaffected.

His character, Dr. Robert Neville, is too rich for a guy who once worked for the government, but movies like this are always absurdly indifferent to monetary realities. Before Manhattan was evacuated due to a lethal virus (a lot like the one that ravaged England in 28 Days Later) Smith and his wife and daughter lived in a Washington Square townhouse that only guys with Sultan of Brunei-type incomes would be able to begin to afford in real life. On top of which Smith mentions a second home (“the farm”)…what is this?

The only other thing that irritated me is a last-act element which I’ll get yelled at for discussing, so forget it. Suffice that the most touching scene in the film is a death scene in which Smith’s character does a kind of Jack Kervorkian thing.

It appears that Smith, who’s only 39, is starting to go seriously gray. His closeups in this film show he’s got a major salt-and-pepper thing going on. He was a young- looking guy only three or four years ago. Now he looks like a buff 49 year-old.