Link between “Rush” and “Legend”

I’m not calling this “odd,” but it’s certainly worth noting that two Warner Bros. releases opening within three weeks of each other — Kirsten Sheridan‘s August Rush (11.21) and Francis Lawrence ‘s I Am Legend (12.14) — appear to have used the exact same colonial-era or 19th Century townhouse building on Washington Square Park north (a building or two east of Fifth Avenue and a stone’s throw from the Washington Square arch) for a key location in their respective films. 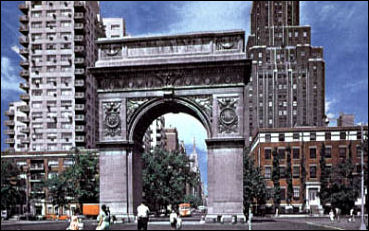 Either the brick building on the lower right or the one right next to it. (I think.)

If not, they used two buildings adjoining each other or certainly no more than two buildings apart. And both very close to the Arch with shots in both films capturing the exact same neighborhood perspective.

A fair portion of the action in I Am Legend happens inside the brick-facade, three-story townhouse in which Will Smith‘s “Robert Neville” character lives, with the camera catching sight of the nearby Arch at least a couple of times. In August Rush, Jonathan Rhys Meyer and Keri Russell‘s characters meet at a party in either the same building or one very close. They go up to the roof and talk and eventually make love (which results in Russell getting pregnant with a kid who is played later in the film by Freddie Highmore).

I don’t know when I Am Legend and August Rush were shot in Manhattan, but it can be presumed either late ’06 or winter-spring ’07. If their schedules touched, one imagines that the location scouts for the higher-budgeted I Am Legend tipped the indie-level August Rush team about sharing the building. Maybe some kind of deal was finagled in which the Rush guys were able to come in and use the location for a day or two just before (or just after) Legend used it. If no such arrangement was made, fine…but it’s a hell of a coincidence.

I would make calls about this, but I’ve got enough aggravation. I know how it works when you try to get info from below-the-liners, who are always terrified about talking to the press. It can sometimes take a couple of days before anyone will call you back, much less level with you…and for what? I know what I know. If anyone knows anything beyond the visually obvious, please get in touch. Thank you.