I’m just hoping that the National Board of Review having given its ’07 Best Picture award to No Country for Old Men (as well as one for Best Adapted Screenplay and Best Ensemble Cast) doesn’t…you know, taint things in some way. Let’s not go there. The bad-news group gave their Best Director award to Sweeney Todd‘s Tim Burton, so there was either a big Best Picture scrap between these two or…you know, they wanted Burton bad at the awards ceremony. 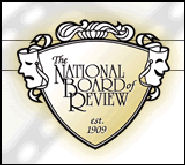 What’s The Bucket List doing on their roster of ’07’s Ten Best films? I don’t think that’s going to result in Jack Nichiolson showing up for the awards ceremony so why’d they do it? Nobody but nobody is over the moon about this thing.

Wells to “Aguirre,” the ghost of Klaus Kinski — what was all that blah-blah about The Kite Runner being an NBR favorite to win Best Picture?