No Hollywood IMAX theatres in Beantown

Before arriving in Boston I told my son Dylan we needed to see Beowulf in IMAX 3-D, and he said forget it — Boston’s two IMAX theatres (the Mugar Omni and the Simons IMAX theatre-aquarium) just show docs and travelogues. Hard to believe. Hollywood flicks projected in IMAX (and especially IMAX 3-D) are delivering big-time thrills like nothing else these days, but if city folk want to catch the IMAX-ed Beowulf, I Am Legend later this month or The Dark Knight next summer, they’ll have to hump it out to suburban Natick or Reading. 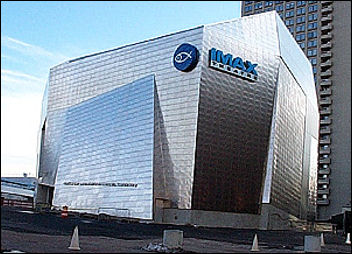 Were Cinerama, CinemaScope and Todd A-O ignored by Boston exhibitors when they hit the scene in the 1950s? In any business you have to go with the flow and change with the times, so why don’t Beantown exhibs have at least least one Hollywood-friendly IMAX house? Get with the program and hubba-hubba, guys.

A local critic offered an explanation. Boston, he wrote back, “is a big-league film town with a severe resistance to change, a sense of entitlement from the cultural institutions, and a belief that people don’t go ‘downtown’ to see movies but rather stay in the ‘burbs where they already live.

“I do think we’ll be seeing more and more 3D downtown in the coming years — basically as the Loews Common
installs more digital projection — but the real estate is scarce for a new IMAX build, and perhaps and the Aquarium and Mugar Omni don’t want to sully their mission (or simply may not be able to, for any variety of reasons).

“In general exhibition has fled Boston proper,” he explained. “The only two movie theaters left within city limits are the Common and the Fenway. That’s not counting the arthouses in Brookline and Cambridge, and the multiplexes of various size in the inner suburbs, 10 minutes from downtown. This is a far cry from the not-so-old days when there were dozens of theaters in Boston.”