I saw Juno for the second time last night at a Leows/AMC plex near Harvard Square. It played a tiny bit better than it did at the Toronto Film Festival, which was mostly thumbs-up to begin with. It’s a smart, ascerbic and kind-hearted film about…a bunch of things. Growing up, good parenting, working through stuff, finding true love? It grooves, it meanders, it has a heart…and I could tell that the people sitting near me in the small theatre were falling for it. 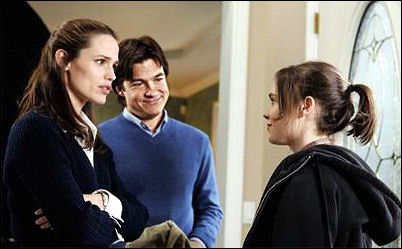 Ellen Page is still enjoyably spunky and feisty in the lead role but (here goes again) she still seems like too much of a scrawny elf to play a woman with child — it’s a little like watching Rick Moranis portray Primo Carnera. And that guitar duet Page performs at the end with Michael Cera is just…fine. Which is another word for nice. Which isn’t enough of a finale for a film that would be a Best Picture nominee.
But Jennifer Garner‘s performance as a clenched, hard-wired career woman who’s looking to adopt Juno’s baby went up a notch or two. I don’t know why exactly. She’s doesn’t have a big money scene or anything. She just inhabits very fully and believably — her character feels lived-in. Ands that final baby-holding moment works pretty well. All I know is that I sat up and took notice and went “hmmm.”
So I’m thinking of putting Garner third in my list of Best Supporting Actress nominees, right behind Cate Blanchett and AmyRyanAmyRyanAnyRyan.