“Sweeney Todd is as much a horror film as a musical: It is cruel in its effects and radical in its misanthropy, expressing a breathtakingly, rigorously pessimistic view of human nature. It is also something close to a masterpiece, a work of extreme — I am tempted to say evil — genius. 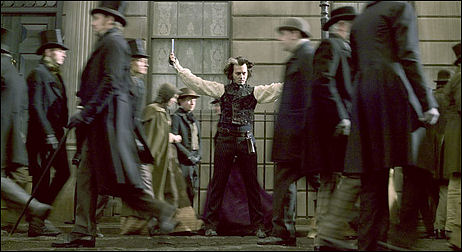 “It may seem strange that I am praising a work of such unremitting savagery. I confess that I’m a little startled myself, but it’s been a long time since a movie gave me nightmares. And the unsettling power of Sweeney Todd comes above all from its bracing refusal of any sentimental consolation, from Tim Burton‘s willingness to push the most dreadful implications of Stephen Sondheim‘s story to their blackest conclusions.
√É¬¢√¢‚Äö¬¨√Ö‚ÄúSweeney Todd is a fable about a world from which the possibility of justice has vanished, replaced on one hand by vain and arbitrary power, on the other by a righteous fury that quickly spirals into madness. There may be a suggestion of hopefulness near the end, but you don√É¬¢√¢‚Äö¬¨√¢‚Äû¬¢t see hope on the screen. What you see is as dark as the grave. What you hear — some of the finest stage music of the past 40 years — is equally infernal, except that you might just as well call it heavenly.” — from A.O. Scott‘s 12.21 N.Y. Times review.