I wrote last May that Juan Antonio Bayona‘s The Orphanage (Picturehouse, 12.28) “is the creepiest sophisticated ghost story/thriller to come along since Alejandro Amenabar‘s The Others, and deserves a ranking alongside other haunted-by-small-children classics as Jack Clayton‘s The Innocents and Nicolas Roeg‘s Don’t Look Now. It also recalls Robert Wise‘s The Haunting, although the ghosts in that 1961 film were all over 21.” 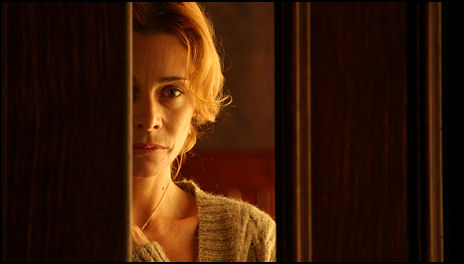 In a 12.24 posting, Newsweek‘s David Ansen has now chimed in along similar lines:

“Movies like the Saw series and the Hostel franchise frighten by assault [and have] driven away a lot of horror-loving adults. Don’t we need and deserve a good fright, too? A little terror, properly applied, is a kind of exorcism, yanking into daylight those primal demons that we stuff away in the back drawers of our psyches. A great horror movie is like a good shrink — and a lot cheaper, too. It purges us through petrification.

“That horror movie, thankfully, has arrived. It’s called The Orphanage, and it is seriously scary.

“This little Spanish ghost movie — made by a gifted young filmmaker named Juan Antonio Bayona and produced by Mexico’s Guillermo del Toro, the man behind last year’s Oscar-winning Pan’s Labyrinth — remixes many familiar horror-movie tropes: a haunted house that was once an orphanage, a sickly child with imaginary friends, a spiritualist contacting the dead, a grieving mother (played to the hilt by Belin Rueda of The Sea Inside) whose sanity appears suspect to everyone but herself. 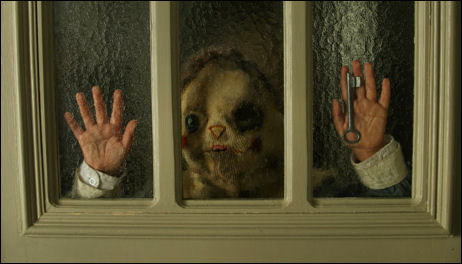 “Though it bears a strong relation to such films as The Others and The Innocents, it feels freshly imagined. The shivers of dread The Orphanage conjures up rely neither on gore nor on special effects: the sight of a child standing in a hallway wearing a grotesquely disturbing burlap mask freaked me out more profoundly than any severed limbs in em>Saw.

“The less you know of the plot, the better. Let’s just say that Sergio Sanchez‘s richly ambiguous screenplay allows you to interpret what you are watching on both a supernatural and a psychological level, and either way is equally unnerving. The small screening-room crowd I watched the movie with was a pretty sophisticated bunch — but not for long. Forty minutes in, our defenses had been shredded. We were alone with our fears, but we quivered as one.”