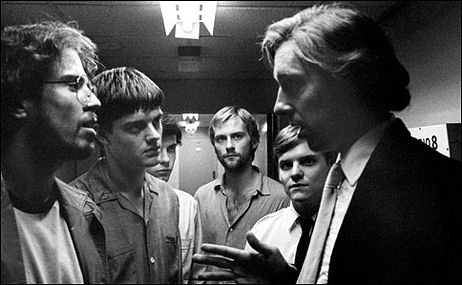 Gebbell’s version is arguably more entertaining than Hoffman’s, and he delivers a bit more humanity and soul in the process…and Hollywood handicappers haven’t so much as mentioned the guy. So I’m mentioning him. Here’s an mp3 clip of Kebbell doing his here-I-am bit with the Joy Division members.

I should have brought up Gebbell a couple of months ago, not that anyone would have paid the slightest attention. I admit he’s got a dorky-sounding name that’s hard to remember (I had to check his IMDB page three times to get it straight), and it should be spelled like “pebble” instead of “Gebbell.” Perhaps with the Control screeners finally going out…who knows? At least Kebbell will get some work out of it. Maybe.