The Criterion Collection Two-Lane Blacktop two-disc set is an absolutely beautiful thing to buy, hold, unwrap and feel cool about owning. It’s got the two DVDs with the remastered feature on one disc and several “looking back” video shorts by director Monte Hellman, plus Rudy Wurlitzer‘s original script and an essay booklet. It’s a first-class package all the way.

But the film, which I saw clear-eyed for the very first time this morning, is only a so-so-thing. It’s great and irksome, in and out, good and mundane…but certainly not an under-appreciated masterwork or the greatest road movie ever made or whatever the fans are saying.
In some ways this 1971 road poem is cool because of its lack of interest in being conventional. It’s about a couple of stock-car freaks (James Taylor, Dennis Wilson) in a ’55 Chevy making their way across the backroads in hopes of…pretty much nothing. They’re supposed to be in a big cross-country race with the owner of a GTO (Warren Oates) with the winner taking the other guy’s pink slip, but they stop racing after a while. They get to know each other, share meals, piss each other off, help each other out and generally drive around and get into minor little encounters and scrapes.
The film has a script that Esquire magazine felt was good enough to print back in ’70, but there’s no story here at all. There’s some atmosphere and aroma and a certain romance-of-the-road thing going on. I didn’t care at all about conventional beats, but I did want Hellman’s film to be mesmerizing on some level.. The truth is that it’s not. I don’t hate it. It’s diverting or moderately cool or a semi-engaging time-travel thing…whatever. But it’s not the Citizen Kane of road movies. Not by a long shot. 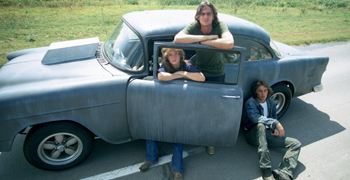 The dirty little secret of Two-Lane Blacktop (i.e., which the elite DVD critics and friends-of-Hellman will never mention) is that it doesn’t look all that great. It is often dark and muddy and lit without the slightest visual intrigue. It doesn’t begin to approach the painterly quality of a Terrence Malick film. The work by dps Jack Deerson and Gregory Sandor has a kind of funky-monkey blah feeling…like it was shot on the fly and the cheap. Laszlo Kovacs‘ lensing of Easy Rider (a low-budget road movie shot two years earlier) is much more engrossing.
So what happens in the film? The three guys compete in a lackadaisical passive- aggressive way for the affections of “the girl” (the late Laurie Bird). None of them win her over at the end. Perhaps she’s too flaky or hippie-ish to be won over…who knows? Wilson does her one night in a motel room, then seems to shine her on. Then Taylor gets interested and then more interested, and then Oates makes a play. In the end she winds up taking off with some kid on a motorcycle.
I don’t have a problem with art movies in which “nothing happens.” I’m a major admirer of Michelangelo’s Antonioni‘s L’eclisse and L’Avventura and Christopher Petit‘s Radio On. I even have a place in my head for Marguerite Duras‘s Le Camion. The problem with Two Lane Blacktop is that it’s not empty enough. In an existential vein. It toys with this and that story element and then loses interest. And then the film melts at the very end. Gimme a break.
Not empty enough, not pretty enough, not funny enough, not weird enough, not kinky enough and not crazy enough. 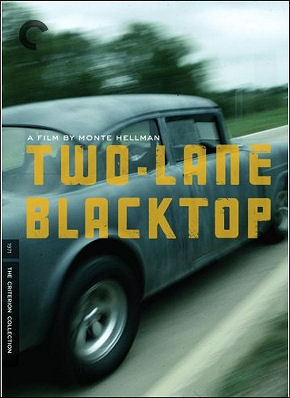