Jake Kasdan and Judd Apatow‘s Walk Hard (Sony, 12.21) is my kind of genre spoof — dry, smart, referenced. I chuckled here and there but mostly I smiled at it, and that’s not a bad thing. I absolutely love that this film doesn’t pander or wallow. It’s not trying to make eight year-olds or the ding-dongs who loved Are We Done Yet? roll in the aisles. It’s into the old-time spirit and attitude of SCTV. 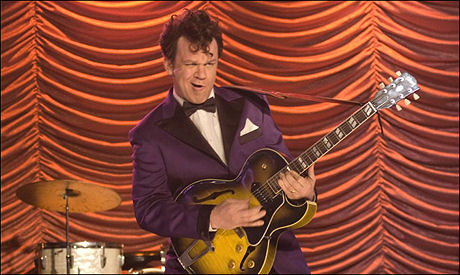 Here’s that clip from the first ten minutes of the film.

Truth be told, Walk Hard is one of those comedies that plays a tiny bit funnier when you’re thinking about it the next day than when you’re sitting there in the seat. You know it’s a clever, high-end thing, but at the same time you’re not exactly howling. I’m not much of a laugher at anything, but I love comedies aimed at people who’ve graduated from high school with at least a B-minus average. Either you’re on the wavelength or you’re not.

The only question I have about the box-office is whether star John C. Reilly has the magnetism to bring in the big crowds.

Nobody would ever mistake Nikki Finke for a cineaste, but she was wrong when she wrote yesterday that Walk Hard “spoofs just about every music biopic ever made.” It mainly spoofs one movie — Walk The Line — with some Ray gags sprinkled in.