Worst of the Year

I’m giving HE’s 2007 Worst Movie of the Year award to Steve Carr‘s Are We Done Yet? The aspect that made it seem more reprehensible than Norbit, Good Luck Chuck, Evan Almighty, Mr. Magorium’s Wonder Emporium or Daddy Day Camp was, for me, the fear-of-animals humor. The idea that a chipmunk or a squirrel would attack humans like a Jurassic raptor is something that only corpulent shopping-mall zombies would laugh at. Only a person who lives in a realm totally apart from nature (and therefore living in fear of it) would laugh at these asinine gags. 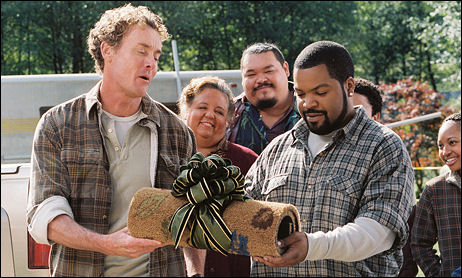 There’s no way around calling Michael Bay‘s Transformers my second most despised ’07 film. The worst single moment of my moviegoing existence this year came when Optimus Prime said “E-Bay” to Shia LeBouf.
I still feel that the ending of 3:10 to Yuma was the most disappointing of the year because I felt so let down by the nuttiness of it, especially after being so satisfied with the second act.
I didn’t feel Rendition was bad enough to rank as one of the very worst. I respected certain aspects of Lions for Lambs — what it tried to do, the daringness of leaning so heavily on mere words, Tom Cruise and Meryl Streep‘s performances — so it, too, justifiably, evaded the list. I hated the decision to go big and obvious with the giant tentacles in The Mist, but it was interesting enough in the beginning to avoid inclusion. I didn’t see Sydney White. Good Luck Chuck was pretty damn awful. I’ve become so used to Eddie Murphy‘s abrasive potential that Norbit, strangely, didn’t rub me as negatively as it did others. (I saw it later than most.)
Georgia Rule, Number 23, etc.? It’s open to discussion. Are We Done Yet? aside, I’m not feeling the hate vibes.