The Zodiac “director’s cut” (out on DVD on 1.8.08) screened the night before last at the Variety screening series at the Arclight. I drove over right after the Sweeney Todd screening and caught the last 45 minutes. I’d seen this cut on a screener sent over a month ago, and yet I felt curiously riveted, glued. I was saying “wow” all over again. This is what great movies do — they refresh their game and deepen and spread out a bit more every time. 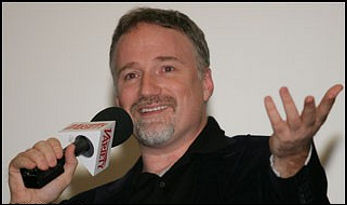 The percentage of Oscar handicappers and Academy apparatchiks who truly get this — who understand that Zodiac is the ultimate Shelby Mustang of ’07, a film so unique and special and unified that even half of the supposed cine-sophisticates don’t quite get the full splendor of it — amounts to a slender slice of the pie. But what a feeling it is to know. I’ve never been so certain of the right-on rootedness of any film in my life. The people who scratch it off their Best Picture lists shall think themselves accurs’d they were not here, and hold their manhoods cheap whiles any speaks that fought with us upon Saint Crispin’s day.

Zodiac director David Fincher, producer Brad Fischer and screenwriter James Vanderbilt sat for a q & a with Variety critic Todd McCarthy after the screening. Fischer had a good quote that I didn’t write down — “This is a newspaper film, not a serial killer film…more in the realm of All The President’s Men” — but no one felt inclined to say what it really is. Maybe it hasn’t struck a deep enough chord because most viewers haven’t been down the road that Jake Gyllenhaal‘s cartoonist character goes down. The quiet madness of an all-consuming obsession. Or maybe a lot of people have and it makes them uncomfortable.