One of these months, Kyle Newman‘s Fanboys — a tragic period comedy about a group of Star Wars fans who attempt to break into George Lucas‘s Skywalker Ranch so a sick friend can watch The Phantom Menace before he croaks — will open in theatres, or at least on DVD. The MGM/Weinstein Co. team was going to have it out by 1.18, but that has apparently fallen by the wayside. An Exhibitor Relations list indicates that the Weinsteiners may have dumped the film altogether. Am I missing some piece of news? 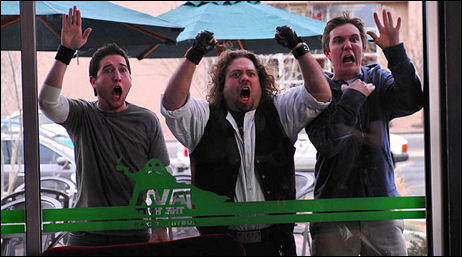 Any film starring the animal Dan Fogler is a potential problem, and any film with this storyline that doesn’t deal at least semi-honestly with the content of The Phantom Menace — a shattering spiritual and emotional comedown for thousands of Star Wars geeks the world over when it opened eight and half years ago , despite the odd fact of it having made obscene earnings — has to be reprehensible on some level. One of the last things a dying geek does is watch the screen debuts of Jake Lloyd and Jar-Jar Binks? That’s sickening.
Rob Burnett‘s Free Enterprise excepted, geek culture movies always seem to run into problems. Whatever happened to Patrick Read Johnson‘s 5.27.77, another Star Wars fanboy flick film that has been in post-production for three or four years without a release?