Hillary Clinton has been trying to “sell” her warm and fuzzy side for weeks now, and today — about three hours ago — she finally scored without “trying” to score. You can call her little Edmund Muskie-like meltdown “calculated” (as my 19 year-old son did on the phone an hour ago), but I sense a real person here — and for the first time in this campaign, I really kind of half-felt for her. For about a minute, I mean.

Imagine what the news media would make of, say, Mitt Romney‘s eyes turning red as he talks about how hard the campaign has been and how tired he is and how much he cares, etc.. Ask yourself honestly — what would they say? You know most of them would say that he’s soft and lacks the backbone to be a tough leader, etc. But because Hillary has been so clenched and frosty for so many months, people feel a little sorry for her when she cracks, and she actually gets points for this…it helps her. 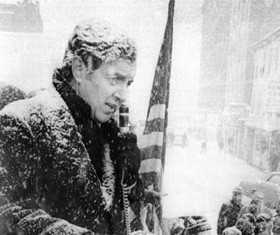 But not from fellow campaigner John Edwards. He hadn’t seen the Hillary meltdown tape when he told CNN’s Dugald McDonnell earlier today, “I think what we need in a commander in chief is strength and resolve, and presidential campaigns are a tough business, but being President of the United States is also a very tough business. And the President of the United States is faced with very, very difficult challenges every single day, difficult judgments every single day.” But he said it nonetheless.