A week or so ago N.Y. Times Oscar blogger David Carr (a.k.a., “the Bagger”) called Atonement the Hillary Clinton of the ’07 Oscar season — a presumptive Best Picture nominee, early front-runner status, now falling behind and possibly even toast. Let’s just say it — it is toast as far as a Best Picture win is concerned. And yet it’s a very strong film. It moved me deeply at Toronto. What happened? 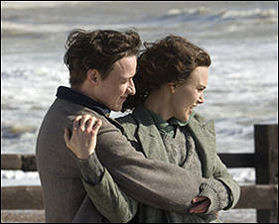 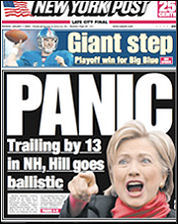 Is it fair to draw linkage?

“The media called it the front-runner early on and it had that hanging around its neck,” says Envelope handicapper and Maxim critic Pete Hammond. “And that’s what’s hurt it, those high expectations attached to the front-runner, like with Hillary I think people like the picture, but they go in with such high expectations, and it’s doesn’t seem to be getting that passionate, first-place vote. It seems to be getting third and fourth-place votes, but that may not be enough. It’s hard to say.”
I’m not saying the Atonement should withdraw from the race — it’s a respectable, touching, very well-made film with a great performance from Vanessa Redgrave at the finale. But Focus Features has definitely had a tough Oscar year sdo far with the complete collapse of Lust Caution and these Hillary/Atonement analogies that are getting around.
Amazingly, a lot of people are saying that David Cronenberg‘s Eastern Promises is one of their favorites, so this may be their strongest hand at this point. Speaking as a life-long Cronenberg fan stretching back to the ’70s, I’m personally saying “no to this film. It left me cold and hating all things Russian, and particularly unhappy with Armin Muehler Stahl‘s performance as the big papa-bear Russian maifioso …”eat the borscht!…play the balalaika!…subjugate and inseminate the women! Awwwgggghhhh!”