I couldn’t help but chuckle at the Rosemary’s Baby speculation in Andrew Morton‘s Tom Cruise: An Unauthorized Biography, to wit: that Suri Cruise is actually the daughter of the late L. Ron Hubbard as a result of Katie Holmes having been “impregnated with Hubbard’s frozen sperm.” 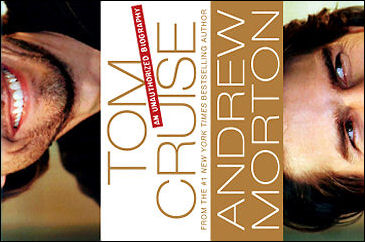 This is one of those rumors that sounds so deranged, it’s classic. It’s like something out of a horror film. It made me imagine the Scientology fertilization ceremony in which Holmes receives Hubbard’s seed, the high officials wearing silk robes and chanting like they do in that orgy scene in Eyes Wide Shut. This rumor, I feel, is “better” — more vivid, more imaginative — than Richard Gere‘s gerbil, better than the body of Walt Disney being in cryogenic cold storage…it belongs to the ages.
Morton doesn’t claim the story is actually true. He’s said that Scientology insiders are muttering about it, whatever that means. Probably nothing.