I dropped by Santa Barbara’s Marjorie Luke theatre yesterday afternoon to see four short films, but mainly to take a look at Josh Brolin‘s X, which he directed, wrote and self-produced. A 15-minute piece about a heavily-tattooed criminal dad (Vincent Riverside) and his hard-bitten, Bonnie Parker-like daughter (Eden Brolin) sharing a violent fate in the desert, X is a first-rate effort — well-shot, nicely paced, engagingly acted. 3 days of shooting, 96 set-ups. It convinces you that Brolin will probably be directing a feature within two or three years. 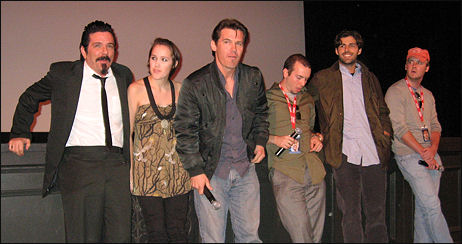 That said, X‘s like-father, like-daughter theme is depressing. Riverside’s character is a low-rent loser who has not only ruined his own life but, it seems, his daughter’s. The short has a certain scuzzy integrity, yes, but I wouldn’t want to see X expanded into a feature. It’s too bleak, the characters too doomed. It left me with nothing except a belief that Brolin can handle himself behind a camera. He’s a funny guy. Something tells me he’d be good with a sardonic comedy of some sort.