Julie Christie‘s visit last night to the Santa Barbara Film Festival was pleasant enough. Cheerful at times. It could have been wonderful if her on-stage chat with Leonard Maltin had upgraded into a Charlie Rose Show-type exchange, but that wasn’t in the script. Christie obviously dislikes “campaigning” and being fawned over, but she was a good sport about watching film clips and trading memories. But she clearly has a lot more on her mind. Has she been on Rose’s show? If not, it should happen. 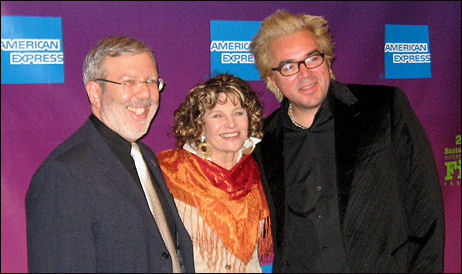 Maltin didn’t touch a hilarious political comment Christie made about President Bush early on. Talking about the amazing era that began with her birth in 1941, she said, “Who would have thought we’d end up today being led by an elite, priveleged monkey?” A stimulating back-and-forth could have ensued about the current political campaign, the Iraq War, global warming and whatnot, but Maltin responded with one of those frozen-in-place smiles that he uses when things have taken a wrong or awkward turn, and in three or four seconds time they were talking about Billy Liar, Darling and director John Schlesinger.
The evening’s biggest boner was the decision by clipmaster Paul Fagen to include a clip from Christie’s all-time worst film, Demon Seed (’77). When Maltin mentioned this Donald Cammell sci-fier, Christie literally convulsed and went “ugh!” Fagen does all the SBFF tribute reels, but anyone who would select a scene from the godawful Demon Seed and ignore the beautiful final scene she shares with Warren Beatty in Heaven Can Wait, as Fagen’s reel did last night, doesn’t “get it.” 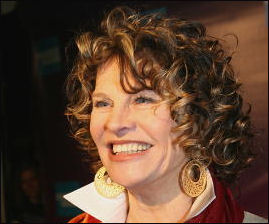 Verdict: Fagen is a good cutter and politically dug-in with the studios and the publicists, but he obviously doesn’t love and understand the best movies the way he could and should.
At one point Christie was talking about the great Richard Lester, who directed her in the superb Petulia (’68), and she said to Maltin, “What was the boat movie? The one with the people on the ship and the bombs in the steel barrels and all that?” Maltin didn’t answer so I shouted out from the my second-row seat, “Juggernaut!” (Santa Barbara blogger Craig Smith reported in his column today that it was SBFF director Roger Durling who shouted out the title of the 1974 Lester film.)
My photos of the Christie event are substandard. I could say I was unlucky or had a lousy seat or need a better camera or whatever, but the fact is I just blew it. Her light brown hair fell in curly tendrils upon her face, slightly obscuring her eyes and cheekbones. But she’s very inner-lit. She didn’t like what she was compelled to do last night, but she gave it hell. 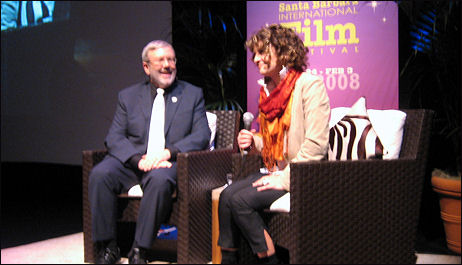