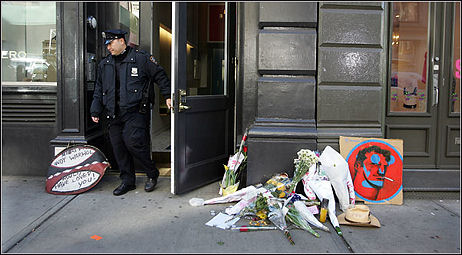 But we all suspect that anyone truly committed to life, health and longevity doesn’t end up dead at age 28 with prescription pills found near his naked body. Ledger didn’t die because a tree fell on him. His death, accidental or otherwise, almost certainly came from somewhere in his own head — his back pages, his behavior, his struggles, and perhaps his failure to pay attention to dosage recommendations on prescription bottles.
There’s that strange video clip making the rounds (taken from an I’m Not There interview) in which he says he feels “good about dying” because he’ll live on through his daughter, Matilda. What 28 year-old father with a two year-old daughter and his whole life ahead of him would even consider such a thought?
There’s that Daily News report by Alison Gendar, Edgar Sandoval and Tracy Connor saying that “friends told investigators that Michelle Williams booted Ledger from the Brooklyn home they shared with their 2-year-old daughter, Matilda, because of a drug problem, a police source said.” N.Y. Times “City Room” blogger Sewell Chan, quoting the Daily News story, extends the quote by saying the breakup was “because of a drug problem that only got worse after he left.”
There’s the anonymous quote give to Daily Mail that Ledger “adored his daughter Matilda, and when Michelle called it quits, he missed Matilda so much that he was thrown into a deep, dark depression.”
There’s a suggestion that heavy medicating was part of his life, as indicated by today’s TMZ report that “two of the medications found at Ledger’s apartment were Xanax and Valium, both anti-anxiety drugs. Cops also found Ambien, along with several medications prescribed in Europe.”
Ledger “had a taste for portraying troubled, brooding, self-destructive young men,” N.Y. Times critic A.O. Scott wrote in an appreciation piece that went up this morning. “The anguished second-generation prison guard in Monster’s Ball, the heroin addict in Candy, the unhappy film star in I’m Not There, the self-torturing Ennis del Mar in Brokeback Mountain. But the temptation to blend their fates with Ledger’s own should be resisted at all costs. Those roles should be seen less as expressions of some imagined inner torment than as evidence of resourcefulness, creative restlessness and wit.”
My head agrees with Scott about resisting such notions, but my gut isn’t so sure. His death didn’t just happen. It came from within. Genuine accidents in life are few and far between.