Having delighted at the aesthetic development and career-growth arc of the great Guillermo del Toro over the last 15 years (i.e., from 1993’s Cronos to Hellboy 2), I’m a tiny bit sorry to read that he’s on the verge of taking a job to direct back-to-back installments of J.R.R. Tolkien‘s The Hobbit, according to the Hollywood Reporter‘s Borys Kit. 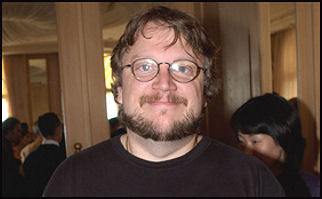 Guillermo will do an excellent job, I’m sure, for his employers — producer Peter Jackson and New Line and MGM — and the fans will be with him, but cranking out two more Tolkien movies after the Lord of the Rings trilogy…yeesh. Where is the genuine hunger to see these films made beyond the New Line stockholders who will profit from them? Del Toro is an old soul who’s capable of much, much more than taking what amounts to a “creative paycheck” job of this sort and playing the jolly maestro for a symphony that has already been written, played and, in a literary sense, digested. Where is the discovery or the challenge for Del Toro in doing this?
At best he’ll get the kind of thumbs-up critical responses that Alfonso Cuaron got from directing Harry Potter and the Prisoner of Azkaban, which is to say he’ll get points for not making a cookie-cutter Peter Jackson movie — for inserting his own sense of narrative precision and visual style. I don’t want to say that a job like this is “strictly about making money and treading water” because I’m not privvy to the creative particulars, but it sure feels like this from my corner. Maybe I’m wrong but I can tell you this — Del Toro’s business manager is a lot happier about this deal than I am.