Tipsters have been telling me to see Jonathan Levine‘s The Wackness, which I managed to catch this morning at 9:30. It’s a quirky coming-of-age dramedy about a Jewish teenaged pot dealer (Josh Peck) falling for the lah-dee-dah step-daughter (Olivia Thirlby) of his marginally unhinged therapist (Ben Kingsley) whom he simultaneously develops a close friendship with. It was wildly cheered after this morning’s Eccles screening, but I was yes and no about it. 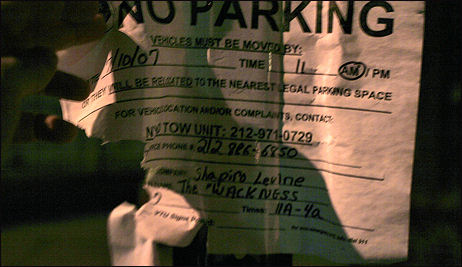 The story, which director-writer Levine apparently based on his own adolescent wanderings, is well told but the basic points seem familiar as hell in numerous ways, and the visually murky, sepia-like photography starts to feel almost claustrophobic after a while. Petra Korner‘s widescreen images aren’t Gordon Willis-y as much as flat-out funereal. I was sitting there going “good God, does everything have to look this fucking dreary? With all this grayish-green shadow slime covering everyone and everything?”
I don’t like Peck that much either. He’s a good spirited actor with a mashed-in face and jutting jaw that makes him resemble a genetically deficient Eric Bogosian, but there’s something low-lifey about the guy. For his part in the film he’s wearing one of those greasy, part-in-the-middle homie haircuts that kids had about 10 or 15 years ago, and he talks with a vaguely retarded-sounding “street” patois. It feels like a tremendous effort for Peck to speak a correctly-composed sentence and pronounce the words correctly…yo! He looks and talks like an alien. (Calorically challenged until a couple of years ago, Peck played the obnoxious porker who was killed in ’04’s Mean Creek.)
And I get riled at movies with characters who constantly medicate with cigarettes, joints, booze, lines of coke. Can any major character in this film get through five minutes straight without adding a stimulant to their system? Irritating as hell. I wanted to throw something at the screen after a while.
But Kingsley’s pot-smoking therapist is gloriously skewed in this thing. He’s almost enough of a reason alone to see it. But that damn cinematography, man…it was really bringing me down. Then you add in Peck’s weird and all those fucking cigarettes and doobies that everyone keeps sucking into their lungs and before you know it you’re thinking about hitting a health club just to flush the experience out of your system.