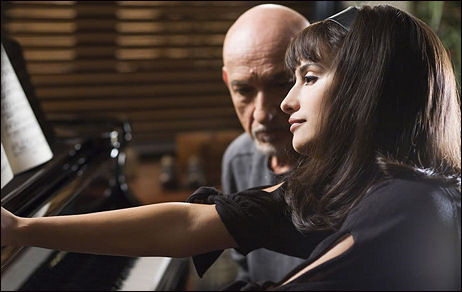 Unreviewed so far (later tonight?), The Dying Animal is based on a Phillip Roth novel of the same name; the title comes from something (a line, a poem… whatever) written by William Butler Yeats, who had a thing for younger women as well.
For the average moviegoer, of course, The Dying Animal is going to be seen as another film about Kingsley doing his wackjob thing — i.e., playing characters who either embody or succumb to an intense but arresting eccentricity bordering on madness. This is what he’s principally become known for since his great seminal performance as Don Logan in Sexy Beast, which came out seven and a half years ago.
Kingsley has played many different sorts, but his nutters attract the most attention. The irresponsible, pot-smoking therapist in The Wackness. The alcoholic hitman in You Kill Me. The nutter criminal type in Lucky Number Slevin. The deranged Herman Tarnower in Mrs. Harris. Is it fair to say that the saner and more rational his characters are, the less engaging Kingsley’s performances are?