Speaking of the plot and high-octane action scenes in 20th Century Fox and Gavin Hood‘s Wolverine flick, which will open 14 and 1/2 months from now (on 5.1.09), star-producer Hugh Jackman has told USA Today‘s Scott Bowles that “with all the success of the X-Men [films], you feel the pressure to keep pushing it further.” 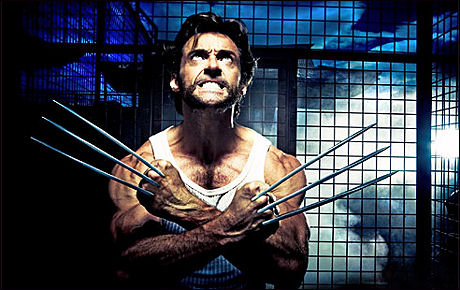 And that, ladies and gents, is a scary omen. It’s the action movie that has the confidence and balls to hold back and make every shot count that wins. (“Shot” referring to any high-impact thrill moment.) An action movie with anxious-asshole production executives goading the director with exclamations like “you’ve gotta out-blast the last X-Men movie…this is a race, a competition…it’s gotta be more-more-more!” is a movie that has the word MEDIOCRE tattooed on its forehead.

Will Michelle Obama please shut up about “there will be no second run for the presidency” if things run against Barack, blah blah? Due respect and all, but it’s a deeply unattractive thing to say.
Nobody respects a one-shot-and-we’re-gone attitude. You have to hunker down and be a stayer. Harvey Milk lost election bids for a San Francisco city supervisor post three times before he finally won after running a fourth time. Inspiration, vision and natural charm are well and good, but nothing happens without brass and tenacity. (The exception is pitching woo. If you haven’t gotten the green-light signal within the first five or ten minutes of the first meeting, forget it. You can’t campaign your way into anyone’s bed.)

Chuckw286 wrote this morning to say he’s “no fan of Hillary by any stretch, but how would you feel about a deal where she steps down now and becomes Obama’s Secy of State?” To which I said “yeah, that would work.” Doubtful but yeah…maybe. Of course, Clinton probably doesn’t have the character or the elegance to give it up graciously after March 4th (given the way the voting is likely to go), which makes any such notion way premature.
My sensings are telling me that Hillary and her campaign team are going to scrap and claw and take everyone down to hell before this is over, dirty pool (Florida, Michigan) and harridan screechings, finagling and biting to the last breath over the last super delegate, fangs and venom and python squeezings until everyone is red-faced and screaming and crying out “enough already!”

The Diablo Cody pile-ons are coming fast and furious. There are two, actually. A 23/6 parody piece in which Cody weighs in on the current violence in Kenya, and a “leaked” Diablo Cody screenplay on Something Awful, written and doodled by the brilliant Bob “BobServo” Mackey. 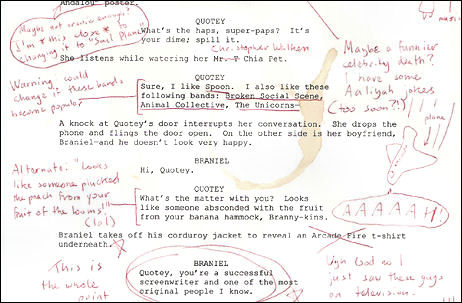 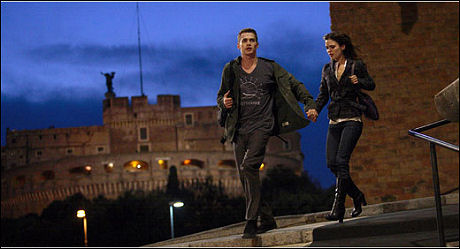 Okay, okay…no more mentions of Uncle Festus. The first-anywhere teaser for Indiana Jones and the Temple of the Crystal Skull is a kind of comic-flamboyant Festus refutation. Too old and tired to play Indy again? Too much of a graybeard Hillary Clinton supporter to direct an Indy film as well as they were directed 21 to 27 years ago? Eat our dust, Festus naysayers!

After the reviewing-the-last-three-Indy films intro (which consists of 40% of the teaser’s length) and an homage to the iconic Indy fedora, it starts off with a clip of a cockney-accented Ray Winstone saying, “This ain’t gonna be easy” and Harrison Ford, standing next to him, saying, “Not as easy as it used to be.”
Then comes the heavy artillery: a series of Harold Lloyd-like CG action sequences that show the past-retirement-age Ford doing stunts that are much wilder and more acrobatic than anything he’s ever done before in these films. Got it.
Then comes the “sell” footage that assures that Crystal Skull is just as much of a popcorn wow as the others. There’s a glimpse of a scene in a warehouse with thousands of wooden crates (the same one in which the Ark of the Covenant was stored at the end of Raiders?), six or seven clips of the South American action scenes with sexy Russian baddie Cate Blanchett barking orders, spear-carrying natives in loincloths, four ancient stone pillars coming together to form a single column….lots and lots of CG that looks like CG. This in itself clearly sets this latest Indy against all the others, which used visual effects, of course, but none this lavish or show-offy.
No aliens, of course. Depicted, I mean. The closest it gets is a very brief clip of a box with the words “Roswell, New Mexico, 1947.”
It looks great, lots of fun and thrills, a barrel of monkeys, I’m there, etc.
He protected the power of the divine. He saved the cradle of civilization. He triumphed over the armies of evil. He smoked a lot of pot and fell asleep in the back of a car once next to a soundstage, but he ate healthily and watched his weight and worked out like a demon before shooting started.