“Will there be a good movie this year?,” Time‘s Richard Corliss asked yesterday. “Do we have to wait till November for Hollywood to unveil the niche prestige items that it saves for Oscar consideration? Is every movie till then doomed to be aimed at the all-important 8-year-old-girl-to-14-year- old-boy demographic?
The Best Films of 2008…hands down, take ’em home, in this order: 4 Months, 3 Weeks and 2 Days, In Bruges, The Band’s Visit, Cassandra’s Dream (second-tier Woody Allen, but not at all bad with a superb Colin Farrell weak-loser performance) and — I know this sounds like a stretch — Sylvester Stallone‘s Rambo, which is one of the most stupidly exhilarating wastes of time I’ve ever paid good money to sit through.

The old melting, tried and true, whatever works.

I’m a fool for photos of Times Square marquees from the ’20s onward. Color, black-and-white…anything that looks sharp and clean and well-framed. I’ve heard about a coffee-table book devoted to such photos, but if anyone knows of any websites with a good assortment or even a site with a single decent shot of any of big marquees announcing any classic film (the Astor showing On The Waterfront, King Kong at the Radio City Music Hall or the Roxy…anything like that), please inform. All I’ve been able to find so far are inky dupes like the one below. 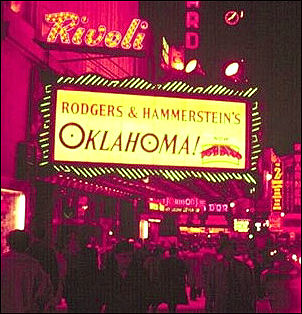 Here’s one passed along by Edward: 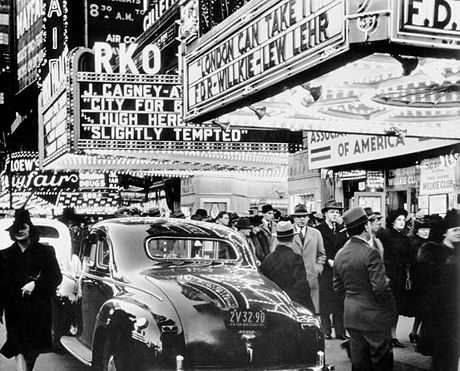 Jose Padilha‘s Elite Squad, described in a Beyond Hollywood review last fall as “a kind of the anti-City of God following the Rio de Jainero police rather than the criminals,” has won the Golden Bear at the 2008 Berlin International Film Festival. The Weinstein Co. will distribute in the U.S., although they haven’t set a release date.

Errol Morris‘s Abu Ghraib doc Standard Operating Procedure won the Silver Bear. Paul Thomas Anderson won the Silver Bear for best director for There Will Be Blood, Jonny Greenwood‘s Blood score was honored for artist contribution, and Wang Ziaoshuai won for his screenplay for In Love We Trust.
Elite Squad is about a government-created special paramilitary force known as BOPE (Battalion for Special Police Operations) charged with dealing with the drug gangs,” the BH review says. ” With their symbol being a skull flanked by crossed swords and a pistol, it√É¬¢√¢‚Äö¬¨√¢‚Äû¬¢s no secret what these guys are about.
“Fast paced and engaging, the film employs a similar episodic narrative structure (complete with chapter breaks) and deadpan narration that keeps the energy high and the story moving forward. And like √É¬¢√¢‚Äö¬¨√Ö‚ÄúCity of God,√É¬¢√¢‚Äö¬¨√Ç¬ù it doesn√É¬¢√¢‚Äö¬¨√¢‚Äû¬¢t shy away from showing the grim realities of the conflict between the police and drug gangs.
“It offers a scathing portrayal of the corruption that is engrained in The System which prevents the wheels of justice from turning. Each division commander has his own scam going, be it collecting protection money from the local strip clubs or selling confiscated guns back to the drug gangs. There√É¬¢√¢‚Äö¬¨√¢‚Äû¬¢s even a hilarious sequence where each division keeps moving the dead bodies from a gang shoot-out to another division√É¬¢√¢‚Äö¬¨√¢‚Äû¬¢s jurisdiction so their field reports look better.”

Missed this two-day-old Variety story about John Landis directing a movie about EC Comics Mad magazine publisher William Gaines called Ghoulishly Yours. Mad was great in the ’50s and early ’60s but you can’t go home again. No one will care outside of the boomers and baby- busters who read the legendary rag when they were young. Sorry, but a bad idea for a theatrical feature. An HBO film at best. 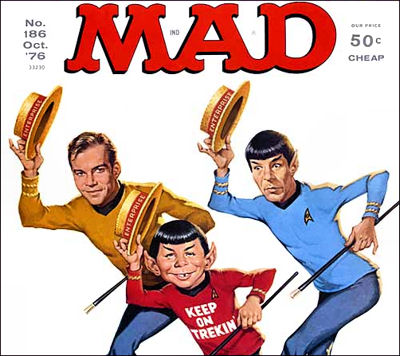 With the Vanity Fair and Elton John Oscar after-parties cancelled (along with the late-night Oscar party hosted by Rick Yorn, Brent Bolthouse, Patrick Whitesell and Mike De Luca), the Governors Ball has become “the undisputed, hot-ticket, must-go-to after-party,” says Variety‘s Bill Higgins.
Also eighty-sixed are Ed Limato‘s annual Friday before the awards party, Dani Janssen‘s Academy Awards party for the over-70 crowd, the Barry Diller and Diane Von Furstenberg Oscar-eve luncheon for Vanity Fair editor Graydon Carter.
All that leaves, according to Higgins, is the annual Night Before party on Saturday, 2.22, the Night Before the Night Before on Friday, and Saturday’s Film Independent Spirit Awards on the beach (which always includes the hugely crowded Shutters party that follows). There’s another thing that Higgins doesn’t mention — an Oscar-nominee party being thrown by Miramax, happening in a cool, high-up place.

This 2.16 N.Y. Times story by Don Van Natta Jr. and Jo Becker goes into pretzel-like contortions in order to not say what’s really going on, but it comes into focus if you settle into the quotes and the careful parsings and hints and whatnot. Bottom line: unless she pulls off a total nuclear blowout in Texas, Ohio and Pennsylvania, Clinton is toast.
Van Natta and Becker’s report about a decision by Al Gore and House Speaker Nancy Pelosi and others to “remain neutral for now in the presidential race in part to keep open the option to broker a peaceful resolution to what they fear could be a bitterly divided convention” is, don’t kid yourself, a slapdown to the Clinton team’s proclaimed intention to purse a backroom winning strategy via superdelegates.
It is particularly a rebuke to that statement by Clinton’s communications director Howard Wolfson that the Clinton campaign will “not concede the race to Barack Obama if he wins a greater number of pledged delegates by the end of the primary season, and if necessary [to rely] on the 796 elected officials and party bigwigs to put her over the top,” as reported two days ago.
This story doesn’t read like much at first, but read it over a second time and let it settle in. Trust me, it’s the next thing to a death-gong.
Hillary could blow Barack out of the water in Texas, Ohio and Pennsvlvania. She could but she almost certainly won’t. Barack will probably match her in Texas delegates, and he could even get more votes. The notion of the space aliens in Ohio and Pennsylvania voting in a radically different way than the way the voters in Virginia and Maryland have just doesn’t figure. It would be just too weird.
And by the way, John Edwards is still acting like a squishy, calculating old-school candy-ass. The man is pathetic.

Agreed — this Verizon FiOS commercial is the cleverest, most likable piece of filmmaking from the hand of Michal Bay since The Rock. Because it has a theme. Because it’s half-sell and half-personal confession. By embracing his rep as the shallowest big-name director around, Bay has almost transcended it. He’ll make his first truly rich and mature (and possibly even moving) film ten years from now. Maybe sooner.

Let’s just take a moment to acknowledge the strange success of The Bucket List. Four out of five of the top critics hated it, and the damn thing keeps selling tickets. It will make $5,191,000 this weekend for a cume of $82 million. Other than the old saw about average audiences having no taste, a view supported by decades of abundant evidence…why? They like the CG travel footage? There’s one good bit in the entire film, which is when Jack Nicholson says that “I believe more people die of visitors than diseases.” 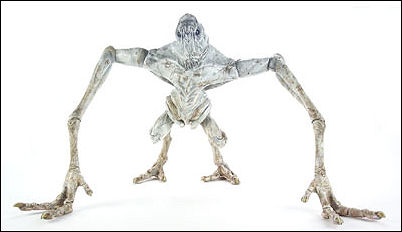 What finally happened with Cloverfield? It was at $71,915,658 domestic as of 2.3 and has sold well overseas, but why did the U.S. box-office plummet so radically after the first weekend? Was it the crazy-cam photography, which reportedly made some people sick? Or was is the nonsensical-inexplicable monster to some extent? Flesh-colored, huge ears, 20 stories tall, long spindly arms…pretty damn absurd.
In a cool way, I mean. I genuinely enjoyed the absurdist approach because it made the monster more of an emotional/psychological construct than a pseudo-literal one that might have barely passed muster by movie-logic standards (i.e., the ones that have explained all past movie monsters). But maybe people might have gotten into it a bit more if the monster had been a old-fashioned Godzilla-like super-reptile with flippers and claws and the ability to breathe fire.
Don’t even start with the spoiler whinings. I don’t want to hear even one peep. The movie was seen by millions and now the Hasbro people are marketing the image online. Just shut up. You know who you are.