GWTW is the lazy choice

Very early in the presidential race (sometime in winter months of ’07), I finally decided I wasn’t going to be cheering on Hillary Clinton‘s campaign because of a gut instinct call. I remember reading a piece about the all-time favorite films of the candidates, and Hillary was quoted as saying (or so I recall) that hers was Gone With The Wind. Another article said her choice was Casablanca. 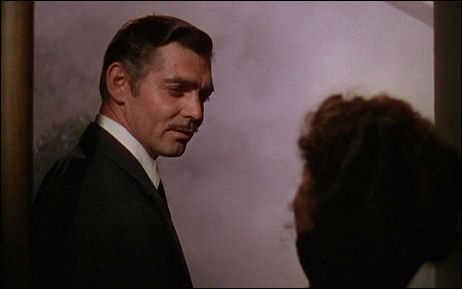 That tore it for me. I love both Casablanca and Gone With the Wind for the usual reasons. I relate to Rick Blaine’s feelings of bitterness and cynicism in the beginning, and I admire his selfless heroism at the finale. And I fully agree with GWTW‘s theme about how brass and gumption gets you through life’s gulleys and thunderstorms better than goodness and generosity.

If I’m right about Clinton having chosen GWTW, it’s not hard to figure why. She obviously sees herself as a tough operator who’s taken the hits and soldiered through. But GWTW isn’t a hip enough selection. It’s a chump call. So is Casablanca.

If Clinton had said, say, that Jules Dassin‘s Rififi was her all-time fave, I would have melted on the spot. Or if she’d chosen a 1950s Douglas Sirk film — I would have at least respected that. (And so would Dave Kehr!) But choosing Gone With the Wind or Casablanca told me she either had timid taste or no taste at all, and had just gone with a politically safe choice because it’s been the lazy choice of millions of MOR film lovers for decades.

And by the way, CNN’s Wolf Blitzer saying that his all-time fave was Ferris Bueller’s Day Off was a bad call. I’ll never look at Blitzer the same way again.

I got started on this jag after reading a Reuters story that just went up about how Gone With the Wind is still the #1 all-time favorite. The story doesn’t give age groups or income levels or anything specific, but what a bummer — what an affirmation of mediocrity in the American soul.