There was a party at the Chateau Marmont last night on behalf of La Vie en Rose star Marion Cotillard, who’s generally considered to be in a neck-and-neck race for the Best Actress Oscar against Away From Her‘s Julie Christie. Held in the two-storied Bungalow #1 and agreeably un-crowded, it was a kind of mixed-bag affair — some press, some publicists, some talent (Star Trek costar Clifton Collins, director Larry Kasdan), producer Mark Johnson, former Paramount Classics chief Ruth Vitale, etc.

I had a chance to speak briefly with Christopher Hampton, the legendary London-based writer whose Atonement script has been nominated for the Best Adapted Screenplay Oscar. I mentioned my admiration for the final scene in which Vanessa Redgrave, playing the final, septugenarian, cancer-ridden incarnation of Briony Tallis, confesses her feelings of life-long guilt for having fatally screwed up the lives of her big sister Cecilia (Keira Knightley) and her sister’s boyfriend Robbie Turner (James McAvoy) to a TV interviewer.
Hampton said that he based this scene largely upon screenwriter and playwright Dennis Potter‘s final interview, taped in 1994, in which he spoke about his oncoming death from cancer and his struggle to finish his work. His interviewer was Melvyn Bragg. The chat was released on VHS in April 2002. 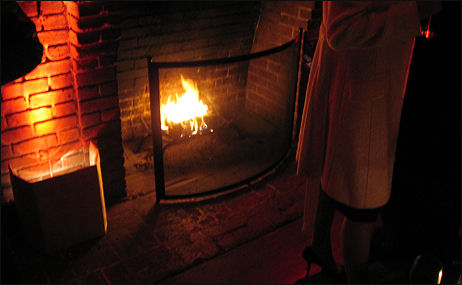