The trailer for Journey to the Center of the Earth 3D (New Line, 7.11) tells you it’s more of a kiddie movie — a logic-free comedy for anyone over the age of 8, or anyone who happens to be a cretin — than any kind of half-gripping adventure-thriller. 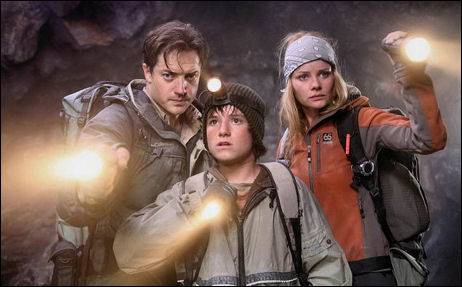 It seems to want to be a poor man’s Indiana Jones film (including a Temple of Doom thrill ride on a train track inside a mine) but the trailer is basically selling a goofy-ass special-effects ride about a visit to the Bullshit Adventure Theme Park where everything can and will happen on an expedition to the earth’s core.
Brendan Fraser, Josh Hutcherson and Anita Briem are the three travellers who run into hot lava, oceans, dinosaurs and whatnot. Pretty much the same stuff that James Mason and Pat Boone encountered in their 1960 adventure flick of the same name. The difference is that the ’60 version had a scowling second-banana villain who referred to the experience of nightly sleep as “little slices of death.” I’ve never forgotten that line. Going to sleep is, in a sense, like dying…or so Carl Sagan once remarked.
The Mummy films killed Brendan Fraser’s believability factor. He pocketed those fat paychecks, but his name became synonymous with second-tier, FX-driven adventure fantasy that didn’t add up for anyone except the moron crowd that will pay to see anything as long as they can guzzle their 32-ounce Cherry Cokes and gorge on gallon-sized containers of popcorn dripping with anhydrous butterfat.

The most hateful thing about stupid adventure films — about all adventure films made by people given to mediocre thinking and imagining, especially since the success of Crouching Tiger, Hidden Dragon — is how falling from any height never results in any harm to anyone. You can fall from a 75-story building, from a mountaintop, from a cliff, from a stepladder — and you will never, ever be hurt. And I mean not even bruised. There’s a trailer clip of the Journey 3D trio free-falling for several seconds — long enough to fall from the height of two World Trade Center towers stacked on top of each other — and they’re saved by falling into a pool of water.
Falling is one of the most fearsome real-life horrors imaginable, but on-screen it’s become an exercise in casual gymnastics. Think — when was the last time anyone died or was even injured from falling in a major action-adventure film? Was it Alan Rickman‘s fall at the end of Die Hard, which was 20 years ago? HINTERLANDS WARNING! SPOILER AHEAD!: (Blankety-blank‘s death fall in In Bruges and Martin Sheen‘s in The Departed don’t count because these films were straight dramas.)
The Journey 3D director is Eric Brevig, who’s mainly worked in special-effects (his only previous directing gig was for Xena: Warrior Princess on the tube in ’95). The screenwriter is Michael Weiss, whose previous credits are War Stories with Oliver North” (1 episode, 2006) and The Remarkable Life and Mysterious Death of General Patton (2006, TV episode).