Two weeks ago Boston Globe film critic Ty Burr delivered an NPR essay about how the “reality TV show with the craziest plot twists, the nuttiest characters and the biggest payoff is what he’s dubbed Primary Reality. It’s on at all hours, on almost every channel. And everyone else is watching, too. It also happens to be the race for the presidency of the United States.” 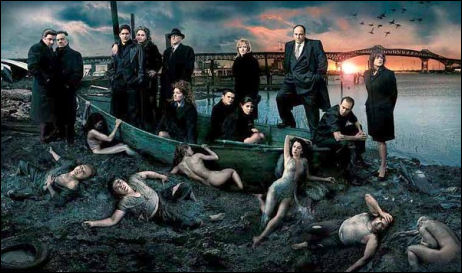 It dawned on me after listening to this yesterday that I’ve become absorbed in the presidential contest like nothing else since The Sopranos. There are no plot or character parallels (except for Hillary Clinton being a kind of Livia Soprano) but the campaign, like David Chase‘s long-running HBO series, is all about us. Recognizable values, identities, echoes, experiences. We all “know” who the political players are deep down (or think we do) and are caught up in guessing their fates and futures, and what forces are working for and against them.
All I know is that the campaign is providing major mainline highs on an almost daily basis, which makes it, in a very real sense, better than The Sopranos. The suspense is constant, there are no bad episodes, the plot turns are fast and furious. That’s why I’m writing about it a lot. It’s a first-rate drama with stirring characters. A stand-up hero, a scheming evil queen, a white-haired soldier with a take-it-or-leave-it attitude, a slick and squishy lawyer with a southern drawl, court jesters, Greek choruses, two-faced acolytes, knaves and fools, etc.