On one hand, there’s Paul Brownfield‘s profile of Matthew McConaughey in yesterday’s L.A. Times. It’s the usual thoughtful but essentially softball stuff with a subhead — “It’s Not Easy Being the World’s Sexiest Man” — that’s not meant ironically. And on the other is a 7.16.06 HE slam piece called “King of the Empties.” 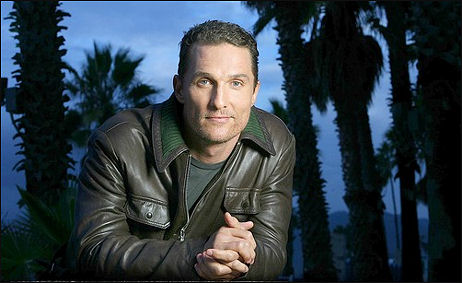 I’ve linked to this rant at least two or three times since it first appeared on 7.16.06 because I’m proud of the writing. I felt it when I wrote it, it came from the heart and a major director whom I respect like God wrote to say he enjoyed it tremendously.

I’m not saying that McConaughey is the shallowest big-name performer around today. How do you measure such a thing? But he sure as hell radiates this. Everything about him says “smug Texas party animal who’s good at raising a stein of beer and going ‘hey-haaaay!’ when ESPN is on at the local bar and who basically lives for the poon and the waves and the good times.”

There’s possible redemption for the Fool’s Gold star in a forthcoming indie-type film called Surfer Dude, which Tom Hanks’ Playtone is producing. Brownfield calls it McConaughey’s “labor of love — shot over a [single] month last summer in Malibu on a budget of $6 million. In it, writes Brownfieid, McConaughey “plays a surfer whose sponsorship gets bought out by a guy who wants to put his surfers in reality shows and digitize their images. McConaughey’s character, Steve Addington, just wants the waves — to be out there naturale. So he quits and finds himself in Malibu waiting out a bummer summer.”