In the realm of romantic comedies, “predictability in itself is not a bug but a feature of the genre,” writes N.Y. Times critic A.O. Scott. But oh, how the gene pool has been compromised. Can we use plain language here? The appropriate term is “mongrelized.” 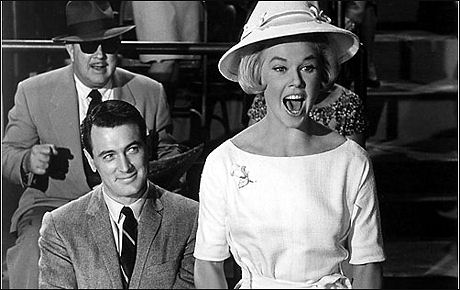 “The marriage plot, after all, is one of the oldest in literature, flourishing in Roman comedy, in the plays of Shakespeare and Moliere and in the novels of Jane Austen. More to the point, the obstacle-strewn road to discovered or recovered bliss was heavily traveled in the old studio days, from the screwball comedies of the 1930s and ’40s to their loopy Technicolor descendants of the late ’50s and early ’60s.
“Our parents and grandparents had Rock Hudson and Doris Day — such delicious subtext! such amazing office furniture! — or Spencer Tracy and Katharine Hepburn. Or Katharine Hepburn and Cary Grant. Or Cary Grant and Rosalind Russell. Or even, in That Touch of Mink, Cary Grant and Doris Day.
“But you get the point. [Today] we have Kate Hudson and Matthew McConaughey.
“Who are perfectly charming. Don’t get me wrong. You remember them in How to Lose a Guy in 10 Days, don’t you? Neither do I, even if a search of this newspaper’s archives indicates that I saw it. I believe Mr. McConaughey wore a striped shirt and played a guy from Staten Island. He is mostly shirtless in Fool’s Gold, which reunites him with Ms. Hudson as a bickering, still-in-love couple whose divorce is disrupted by a search for undersea treasure.”