“Some say Jack overacts — but they are the critics who always made the mistake of seeing him as a Method-based naturalist. Like Brando, he is a romantic and a wild risk-taker. For in Jack’s mind, The Shining is every bit as real as Ironweed or Five Easy Pieces. Jack believes in being taken over by spirits, and in not being a dull boy. 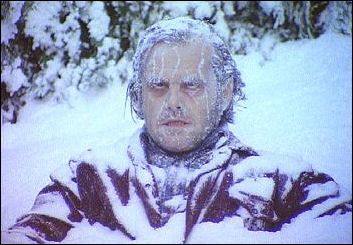 “And if you were to say to him that Hollywood acting is really a pretty stupid thing for a grown-up to be doing, he’d likely agree and say that was the curse that overtook Marlon: Brando lost belief. But no one’s taking it from Jack.” — from David Thomson‘s 2.8.08 Guardian piece, which begins with a statement that Nicholson is “at an age at which the critic begins to move over for the obituarist” and that “he knows he’s living on the margin of extra time. Call it sudden death — I suspect that’s all he’d ask for.”