When I think of Valentine’s Day, I usually imagine a bunch of Chicago hoods getting machine-gunned to death back in 1929. But this year is different. Partly because I’m in a great relationship groove (God has smiled down), and partly because there’s a stand-out Valentine’s Day Word Theatre event happening on Thursday, 2.14 at Social (formerly the Hollywood Athletic Club) that will be refreshingly free of the usual trite, mawkish sentiments that tend to coagulate on this romantic holiday.

It’s called “Hot Flicks: Love Scenes from the Silver Screen.” The performers will be Richard Schiff, Illeana Douglas, Chris Gorham, Amanda Seyfried (star of the forthcoming Mamma Mia!), the great Donal Logue (Zodiac, The Tao of Steve), Christina Pickles, Kali Rocha, Michael Rodgers, Toni Trucks, and Raviv Ullman.
I’ve been to Word Theatre events before and know something about the experience. It’s like seeing a first-rate play without the acts or the scenery or the makeup or the blackouts or the tight seating. And with gifted actors, a classy clientele, excellent hors d’oeuvres and (if you’re so inclined) booze.
Good love-scene movie dialogue is hard to come by. Mainly because filmmakers don’t tend to believe in it. Moments of longing, hunger, unrequited love, tenderness or spiritual affinity between characters tend to sink in more deeply when expressed non-verbally. Through the eyes, for the most part, or sometimes with a gesture that isn’t meant to be seen. Like Ward Bond happening to notice the wife of John Wayne’s brother gently stroking the Duke’s Civil War uniform in John Ford‘s The Searchers. Or Heath Ledger pressing his face into Jake Gyllenhaal‘s tattered shirt during a private moment near the end of Brokeback Mountain. 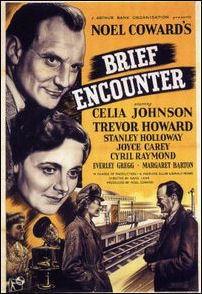 But affecting I-care-about-you dialogue happens nonetheless. My personal favorite is this passage from Jerry Maguire. (Notice that I didn’t include “you complete me” or “you had me at hello.”) I’m also a big fan of “you make me want to be a better man” from As Good As It Gets.
I’ve also always liked the dialogue between Trevor Howard and Celia Johnson in David Lean‘s Brief Encounter. I’m told this will be included in the 2.14 program.