I have an instant problem with scene descriptions of rottin’ dead dogs and mayflies and greasy spoons with good old truck drivers sayin’ where they’ve a’trucked to. I especially don’t like readin’ about some lowdown Robert Johnson tune playin’ as a title card says we’re in the southern Indiana lowlands in the year 1985. When Ronald Reagan was in the White House and scratchy 78 rpms of Johnson’s Delta blues songs were heard almost everywhere, and were cherished in the hearts of the people. 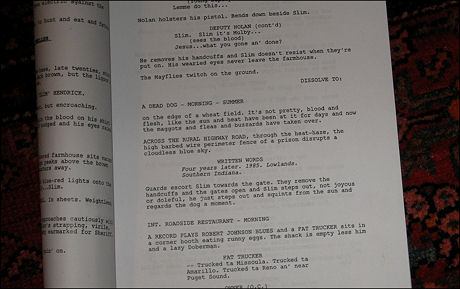 Hollywood sure loves the idea of rural Middle America bein’ a land where there ain’t no Walmart or Starbucks or nothin’ like that, and where workin’ men called Slim and Buck and Jethro sip from half-pint whiskey bottles and roll their own makins and order eggs, taters ‘n’ bacon as they wipe sweat from their brows with tattooed forearms.

If you didn’t recognize this main-title music, you’d know right away it’s some kind of spunky chick flick about starting over after a divorce. I’m kidding. The point is that there’s no mistaking what you’re in for once you hear it. The Mina-title music for Tim Burton‘s Beetlejuice worked just as well this way; ditto Ed Wood. This track gets you excited and in the mood besides. There are dozens of others that have done this; perhaps some recently. Examples?

I finally clicked on that IFC/Red Bull ad, which I didn’t have a clue about since I don’t do the selling these days. The IFC guys want people to submit a trailer for a miniseries with an urban nocturnal theme. It can’t be any longer than six minutes and it has to tell some kind of story. That doesn’t seem too hard. As always, the thing to do is avoid the cliches. No stories about bartenders, waitresses, cabbies, cops. I got it, I got it — make one about a homeless cat. Or a dog. The lonely lives of vagrant animals.

I’ve been trying to refine my reactions to Amir Bar-Lev‘s My Kid Could Paint That, an ’07 Sony Classics release that came out on DVD earlier this month. And they won’t. It’s a documentary that nearly kills you with its refusal to say “this is this.” Life itself may have indeed refused to provide a clear answer to the film’s Big Question, which has to do with a possible art fraud, but that doesn’t make the film any less irksome. 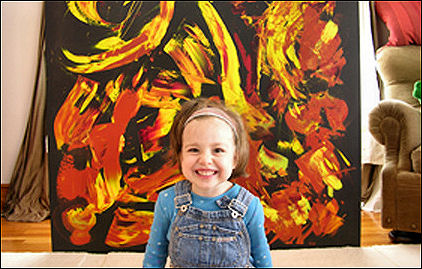 I only know that when Bar-Lev’s film was over, I put it out of my mind. Later! All movies are show-and-tell games, but this one, however open and probing and appropriately non-judgmental, shows and blows smoke.
The B.Q. concerns Marla Olmstead, an eight year-old from Binghampton who became moderately famous in ’04 for having painted (when she was four) abstract oil paintings that were striking enough to sell modestly, and then get atttention from more and more journalists, and then sell in the big-time market for five figures.
Average Joe types have been snickering at high-priced canvases for decades, dismissing the whole modern-art culture as a kind of con game, etc. Which My Kid Could Paint That toys with throughout its running time. But the film mainly follows the lead of a big expose piece that Charlie Rose and 60 Minutes aired in February ’05 about whether Marla”s canvases were entirely self-created or whether she was helped a bit by her dad, Mark, a Frito-Lay factory manager who paints on the side.
Mark and his wife Laura, a dental technician, don’t seem like con artists, but they do seem to enjoy the attention and wealth that comes through Marla’s celebrity. And we’re all whores in the sense that we all like to glide along when things are grooving along. I don’t think Mark deliberately duped the art world by standing nearby and specifically telling his daughter what to do with the paint and brushes, but who knows? Maybe he suggested a couple of ideas here and there. Or more than a couple. Or none at all. 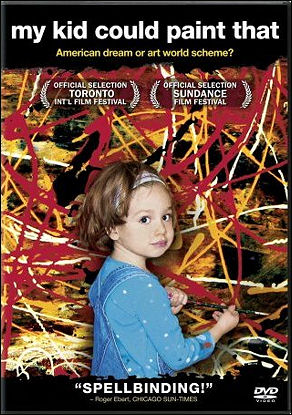 And perhaps “maybe” is all one can say about this situation. Maybe a definitive bust or exoneration is out of the question. But I don’t want fucking maybes when I go to see a movie. The only way I’ll accept them is when the filmmaker somehow conveys what he/she really thinks, and persuades me to come to the same gut conclusions. If there’s no clarity or closure or at least some kind of ending that has a discernible undercurrent, then whadaya whadaya?
I didn’t hate My Kid Could Paint That. It’s not boring, it’s intelligent and well made, it had me start to finish. But there’s a part of me that is mildly pissed at Bar-Lev for making a film good enough to get a 95% positive from the Rotten Tomatoes elite, and persuade Sony Classics’ Tom Bernard and Michael Barker, a couple of shrewd hombres, to pick it up and release it, and at the same time make me feel the way I did after it was over, which was more or less “what the fuck?”
The only clear conviction you come away with is a good feeling about Marla herself. She’s a character, mature beyond her years, robst of spirit. She may continue to paint or not. But I wonder what she’ll say about all this hoo-hah 10 or 15 years hence. Whatever and whenever she spills, it’ll probably be more intriguing than Amir Bar-Lev’s film.
If you want a satisfying dissection of the art world, something that provides a genuine sensation of curtains parting, some kind of semblance of the “aha!” phenomenon, read Tom Wolfe‘s “The Painted Word.”