The death of Anthony Minghella, who succumbed to a hemmorhage in London a little less than twelve hours ago, comes as a huge shock. He was only 54, and had decades to go. Sincere condolences to his family, friends (especially his partner Sydney Pollack), colleagues and fans. 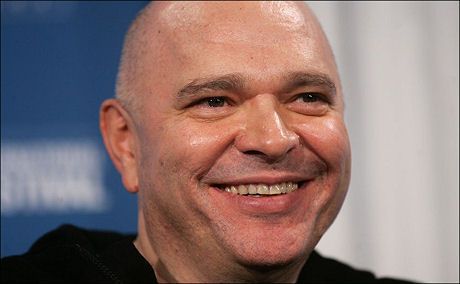 Minghella’s spokesperson Leslee Dart called this morning to explain that Minghella didn’t die of a brain hemmorhage, which a spokesperson stated in London and was reported by Variety. She said she didn’t know any other specifics about the hemmorhage. Minghella “had been diagnosed with cancer of the tonsils, and had an operation to remove [cancerous elements]. The doctors were very optimistic, it had been caught it in plenty of time and he was recovering as expected. And then this happened.”
Minghella had perhaps the gentlest and most serene temperament of all the big-time directors I’ve known and dealt with. When I expressed reservations about Cold Mountain after catching an early screening, Minghella wanted to sit down and discuss them. We did that, and it was a completely agreeable, painless and at times even amusing conversation. I was amazed and delighted by this, and pretty much fell in love with him at that moment.
Minghella adopted the same attitude when I had problems with Breaking and Entering. He spoke to me at a Peggy Siegal party in New York, and asked me to watch it a second time. I told him I would, and I did. Minghella was always smiling, always a soft-spoken diplomat, eternally thoughtful and sensitive.
What a sad morning this is for me. I’m also dealing with my sister Laura having died last night in Connecticut from cancer, about a half hour before Minghella’s departure.
Minghella left the planet at 5 a.m. this morning (last night around 9 pm Pacific time) at Charing Cross Hospital in London, “where he had undergone a routine operation on his neck,” according to Variety‘s Adam Daltrey and Ali Jaafar.
Minghella “most recently directed the BBC/HBO telepic No 1 Ladies Detective Agency, based on Alexander McCall Smith‘s novel set in Botswana, which is due to premiere March 23 on BBC1,” Variety says.
Minghella’s films include the Oscar-winning The English Patient, Breaking and Entering, Cold Mountain, The Talented Mr Ripley and Truly Madly Deeply. He was the chairman of the British Film Institute until recently. Variety says he was “scheduled to shoot a segment” for the anthology New York, I Love You.