Slashfilm’s Peter Sciretta has posted a piece about an alleged San Francisco backlash to the Forgetting Sarah Marshall slogan campaign. If any San Francisco HE readers notice any of these satirical knockoffs that Sciretta is referring to, please snap a photo and send it along. 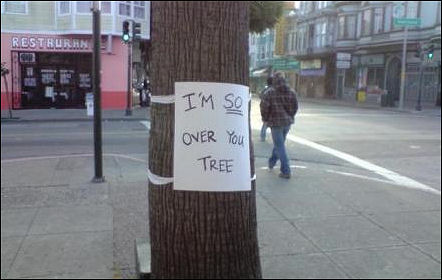 Sciretta begins by explaining that he recently wrote “about Universal’s genius viral marketing campaign for the upcoming Judd Apatow-produced comedy Forgetting Sarah Marshall, which had taken over San Francisco. Signs on buses, bus shelters and billboards with cryptic messages that read ‘I hate You Sarah Marshall’, “My Mom Always Hated You Sarah Marshall’ and ‘You Do Look Fat in Those Jeans, Sarah Marshall’, lead those who notice to ihatesarahmarshall.com.
“It’s actually a very cool campaign, maybe too good. There are so many of these advertisements around San Francisco that a backlash has begun. Last week flyers that look like the Sarah Marshall advertisements have started appearing on trees around the city reading ‘I’m So Over You, Tree’. Another person snapped the photo below of a tree-attached flyer which reads ‘You Do Look Fat in those jeans, tree”.
Forgetting Sarah Marshall, which I found personally painful to sit through (in part because of the film having forced me to contemplate certain aspects of Jason Segel‘s anatomy), opens on 4.18.