In a 4.7.08 review, New Yorker critic David Denby is playing my Stop-Loss song, or vice versa or something in between. But Kimberly Peirce‘s film opened two days ago and didn’t exactly rewrite box-office history, so Denby’s support has come late in the game. Perhaps too late. 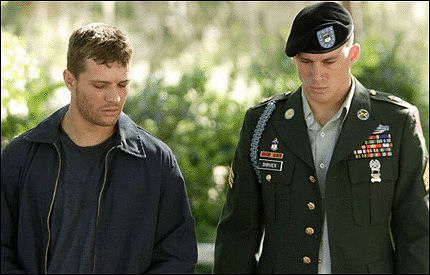 Stop-Loss “is not a great movie,” Denby says, “but it’s forceful, effective, and alive, with the raw, mixed-up emotions produced by an endless war — a time when the patriotism of military families is in danger of being exploited beyond endurance.
“This movie may become the central coming-home-from-the-war story of this period, just as The Best Years of Our Lives, made in 1946, became central to the period after the Second World War. Like that extraordinary work, Stop-Loss is devoted to the men’s hidden wounds — the wired-up tensions and nightmares that lead to drunkenness, fights, smashed love affairs and marriages.
“Throughout the Second World War, Hollywood made dozens of patriotic combat films, as well as occasional home-front movies (like Tender Comrade with Ginger Rogers) about gallant wives. The Korean War, except for B-movies by Samuel Fuller and Joseph H. Lewis, went undramatized until it was over, and this was largely true of the Vietnam War, too. During all these wars, none of the discomforts of the returning soldier, or the dismay of his friends and family, were shown on the screen.
Most of the recent feature films about Iraq (Rendition, Lions for Lambs, Redacted) have not been very good, and the public has stayed away from them. But audiences ignored Paul Haggis‘s sternly beautiful and moving In the Valley of Elah, too. Something more than the usual resistance to ‘tough’ subjects may be hurting these movies. The Bush Administration told us that we were waging a war for our survival, but it also suggested that most of us needn’t make sacrifices or even learn much about the conflict. Then again, some people may be so angered by the war that they don’t want to be confronted by it as entertainment.
“But Kimberly Peirce, whose younger brother has served in Iraq, has conceived her picture in popular terms that won’t be easy to ignore. Except for a few enraged sentiments that Brandon unloads on his commanding officer, Stop-Loss is not overtly critical of the war, but the way it uses the soldiers’ experience is inherently political. Peirce plays the antiwar game fairly. Indeed, she plays it as if she were a soldier herself.
“It’s hard to find the right tone for these movies, because even in victory there is loss. And the second Iraq war hasn’t yielded victory, nor is it likely to. For all the shoving and cursing and jangled videos, Stop-Loss has its own kind of tentativeness. Ryan Phillipe‘s Brandon King, who is both violent and highly moral (a classic American combination), struggles to understand what’s right, yet the movie doesn’t hold much hope that things are going to work out for him.
“At this moment, and maybe in the future, too, the resolution of an American warrior’s doubts is impossible to imagine. The soldiers are held together by their love for one another, and that element of Army life may make Stop-Loss popular with both liberals and conservatives, but no one, I think, will be happy about what the movie suggests is happening to some of the best young people in the country.”