Responding to the Weinstein Co.’s decision to open Vicky Cristina Barcelona on 8.29.08 instead of December, N.Y. Post critic Lou Lumenick wrote a day or two ago that he’d “be tempted to say the Woody Allen movie is being dumped if I hadn’t gotten a lecture last year from Harvey Weinstein himself on how the second half of August is no longer a wasteland.” 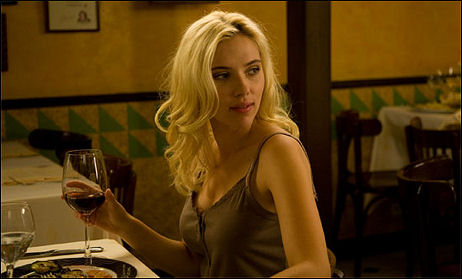 I was lectured on this very same point in 1993 by a Columbia Pictures publicist when I was researching an article about Mike Myers‘ So I Married An Axe Murderer. I had mentioned in conversation that August, during which the studio was thinking about releasing the film, was seen as a “dumping ground,” and boy, did they jump all over me! [SIMAAM was finally released on 7.30.93.]
In any case, Lumenick might want to also consider an opinion of VCB that I heard a couple of days ago from an actor-director friend, to wit: “Not great but very good…funny and sweet and sad and way, way better then his last few movies, including Match Point…Penelope Cruz walks away with it. And the sex scene [lesbo action between Scarlett Johansson and Rebeca Hall or Cruz or whomever] is really, really sexy. It’s so weird that Woody Allen did it.”