Eclipse of the Hunk?

A very significant revolutionary concept has been pushed repeatedly in films produced, written or directed by movie-comedy maestro Judd Apatow over the last three or four years, and I’m not sure it’s been explained as throughly as it should be. The idea, admittedly old hat for anyone half-familiar with Apatow World, is that marginally unattractive guys — witty stoners, clever fatties, doughy-bodied dorks, thoughtful-sensitive dweebs and bearish oversize guys in their 20s and 30s — can be and in fact are the new “romantic leads” (for lack of a better or more appropriate term) in today’s comedies. 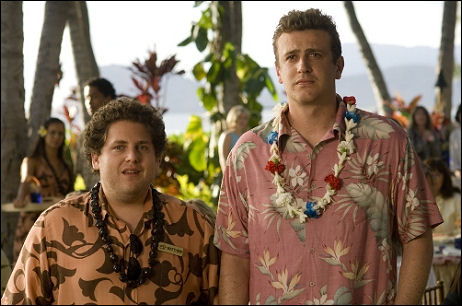 Question is, what if this starts to manifest in realms outside Apatow World? Young teenage girls will always have a thing for the Zac Efrons and young Leonardo DiCaprios, but what if Hollywood, looking to follow Apatow’s lead in reflecting the real-life shlumpiness of typical GenX and GenY guys, generally starts to divest itself of conventionally good-looking actors as far as the over-21 ranks are concerned? Has Apatow started something, or does he live (and create) in a world totally his own?

I got started on this after watching Forgetting Sarah Marshall (Universal, 4.18) last night. The star is the galumphy, heavy-bodied Jason Segel, and the first thing you seem him do is wiggle his breasts in front of a bathroom mirror. Not by shaking his torso, but in the same way people wiggle their nose or their ears.

I immediately went, “Oh, shit…I’m stuck with this dude for the whole film.” Segel is an obviously bright guy with moderately appealing features, but he also has a chunky, blemished ass and little white man-boobs, and he could definitely use a little treadmill and stairmaster time and a serious cutback program regarding pasta, Frito scoop chips, Ben & Jerry’s and Fatburger takeout. I don’t relate to this shit at all, I was muttering to myself. 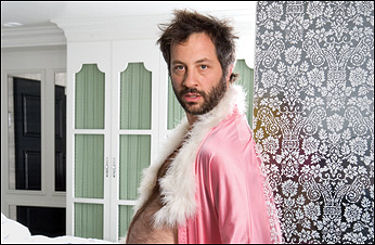 I’m not referring to the film itself (which everyone around me seemed to have a pretty good time with). I’m talking about the simple exercise of relating to a lead character during the first 10 or 15 minutes of a film and saying to myself, “Yeah, that’s me to some extent…I’m sorta like that guy…I’ve been there,” etc. If you can’t do that, as I couldn’t last night, the movie isn’t going to work for you. Like, at all.

The success of Apatow’s comedies strongly suggests that most moviegoers don’t have this problem. They’re cool with schlumps getting the girl. Dramas are another matter, but in Apatow World, at least, moderately good-looking (or at least pleasant-featured) regular guys, neurotics or semi-smoothies who go to the gym every once in a while and maybe resemble the slightly fuller-bodied, not-quite-as-good-looking brothers of Matt Damon or Adrien Brody or Brad Pitt are totally out.

Taking their place are guys who look like real guys, which means almost never slender or buffed, and frequently chunky, overweight or obese. And usually with roundish faces with half-hearted beard growth, hair on their backs, man-boobs with tit hairs, blemishes, and always horribly dressed — open-collared plaid dress shirts, low-thread-count T-shirts with lame-ass slogans or promotions on the chest, long shorts and sandals (or flip-flops), monkey feet, unpedicured toenails. 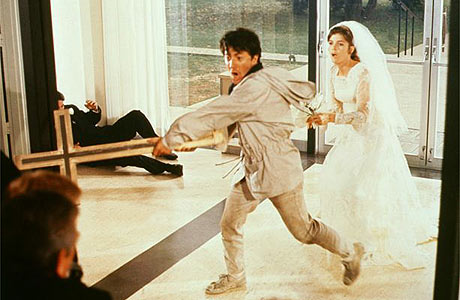 For better or worse, smart schlumps are the Cary Grants, Fred McMurrays, William Powells and Clark Gables in this very particular and restricted realm.

We’ve seen this phenomenon in six Apatow fims over the last four years — Anchorman: The Legend of Ron Burgundy (in which the semi-grotesque Will Ferrell seduces Christina Applegate), The 40 Year-Old Virgin (withdrawn, socially immobile Steve Carrell emerges from shell, falls in love with Catherine Keener), Knocked up (stoner-slacker Seth Rogen beds and gradually builds a serious relationship with Katherine Heigl), Superbad (the incorrigibly nerdy Christopher Mintz-Plasse gets lucky with a hottie, Jonah Hill finds the real thing with a nice girl in Act Three), Walk Hard (John C. Reilly-as-Johnny Cash, scoring and relationship-ing over a 40-year stretch with relative ease) and the upcoming Forgetting Sarah Marshall (Segel losing a hot-blonde girlfriend, hooking up with a beautiful brunette in the same class).

What’s happening here is more than just Apatow rewriting romantic movie mythology by selling variations of himself as sexually appealing. We’re talking about audiences totally buying into the notion that guys who look like this actually do attract hot women of good character, go to bed with them, fall in love and all the rest of it. 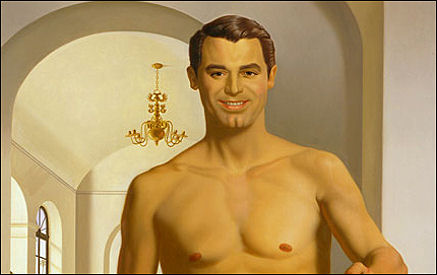 Ten years ago female moviegoers, I believe, would have totally rejected this. Twenty or thirty years ago mainstream audiences would have walked out of theatres in confusion (if not disgust) if guys who look like Rogen, Segel, Hill or Mintz-Plasse got the girl. If filmmakers had tried to push this concept in movies of the ’40s or ’50s the House Un-American Activites Committee would have held Congressional hearings. If films of this slant had been made in the 1920s or ’30s people would have seen them as tragedies or grotesque oddities in the vein of Todd Browning‘s Freaks.

When you think about it, the last time Hollywood said to the moviegoing public “hold on…guys who look like this can get the pretty girl and in fact do score in the real world” was 41 years ago, when the short, dweeby-Jewish Dustin Hoffman connected with Katherine Ross and bedded Anne Bancroft in The Graduate (’67).

Before that landmark Mike Nichols film male romantic leads had all been pretty much cut from the same three cloths — traditional standard-handsome smoothies a la Cary Grant or Rock Hudson or Clark Gable, good-looking troubled moodies like Marlon Brando, Montgomery Clift or Frank Sinatra, or all-American sunny-personality guys like James Stewart or Van Johnson. Hoffman’s Benjamin Braddock was something very new — nice-looking but anxious, neurotic, not tall and of the Hebrew persuasion.

I don’t know where else to take this idea or how to end the article, even, so I’ll just kneecap it here and leave well enough alone. I only know that if I were a girl or gay and Jason Segel came up to me at a bar and tried to put the moves on, I would scrunch my face up and say, “Are you fucking kidding me?” 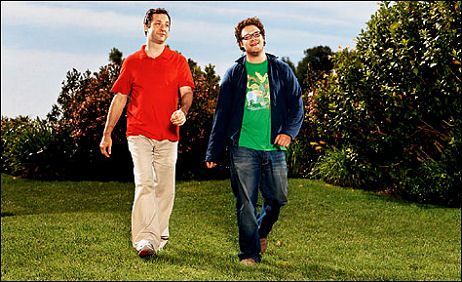