Let’s hear some affection for poor Gary Gygax, the co-creator of the iconic Dungeons & Dragons — literally the father of modern role-playing gaming — who died today at age 69 from heart troubles. 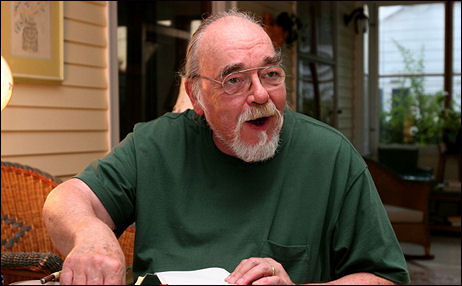 Dungeons & Dragons was first marketed in ’74. I was never a gamer and didn’t know or care about D & D until Henry Thomas‘s Elliot character mentioned it in E.T., the Extra-Terrestrial. (I was too old and too hormonally-driven to focus my energies on anything that didn’t involve girls, clubbing, playing music, etc.) The game was basically “about players creating magical and heroic characters and guiding them through a series of adventures,” etc.
The interesting thing was the absence of a set game board in this interactive, imaginative adventure, an obit says. All you needed was paper, pen, the dungeon master’s rule book and a set of multi-sided dice. D&D “spawned a booming industry and has inspired a generation of writers, video game designers and filmmakers.”