Most depression-era gangsters had coarse features — puffy, rough-looking, scarred, pockmarked — with feral, pitiless eyes. Some were flat-out ugly. Movie stars tend to have appealing, often pretty faces and are pretty much unable to walk into a room without engaging audience empathy. So there’s a Hollywood b.s. factor going in when you cast anyone genetically gifted as a gun-totin’ psychopath. 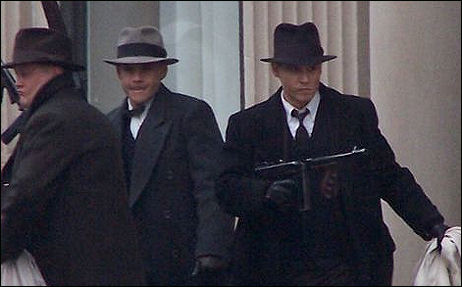 Like, for example, when Bonnie and Clyde producer Warren Beatty cast himself as the short, dorky-looking Clyde Barrow. This worked, obviously, because the equally pretty Faye Dunaway played Bonnie — she and Beatty at least made for a balanced fantasy — and because the film sold them as a couple of rebellious ’60s kids. But the movie star-gangster thing is basically trouble.
Did anyone believe Tom Hanks as gangland assassin in The Road to Perdition? I was able to roll with it because director Sam Mendes and cinematographer Conrad Hall did a superb job together, and because Hanks gave it hell — but nobody bought it deep down.
I’m as willing to be suckered by Hollywood flotsam as the next guy, but I know right now I’m going to have trouble accepting the dark-eyed, still boyishly good-looking Johnny Depp as the notoriously impudent and snarly-looking John Dillinger in Michael Mann‘s adaptation of Bryan Burrough‘s “Public Enemies.” 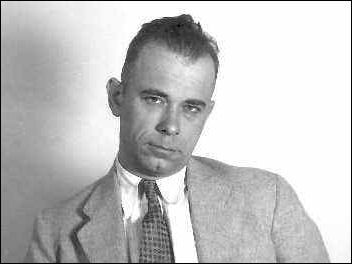 Nobody is a bigger fool for Mann films than myself. I fell for the fumes in Miami Vice, and took a lot of heat for that. And I’m fairly certain I’m going to love (or at least be impressed by) Public Enemies. But Depp-as-Dillinger seems almost surreal in its physical (and possibly spiritual) wrongness. The only ’30s gangster Depp could realistically play, maybe, would be Pretty Boy Floyd (who wasn’t that pretty, by the way).
The best Hollywood facsimile of all time was Warren Oates in John Milius‘ Dillinger (’73). He looked like the real McCoy, he had the internals, and he was Warren Oates. I never saw Lawrence Tierney‘s portrayal in Dillinger (’45), but I’ll bet it was fairly on the money. I don’t think you can’t “play” a gangster. On some level you have to actually be one, or the audience will smell it.
I don’t know what this says about Jude Law, but his most convincing screen role by far was a gimpy, twitchy, odd-looking assassin in The Road to Perdition.
George Raft, James Cagney and Humphrey Bogart totally looked and acted like real toughs. But some guys just don’t have it. Look at that shot of the real Dillinger above — there’s a world of hurt and rage and vengeance in that beefy Midwestern face. There’s a reason why Pat O’Brien or Franchot Tone or Jimmy Stewart almost never played villains. (Until they got older, I mean.) 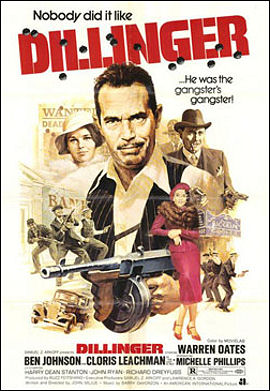 Depp is much more in the delicate, ethereal, sensitive-guy realm. There’s a reason why he was so good as Edward Scissorhands and Ed Wood and Jack Sparrow, roles that are partly about tapping into a certain otherness (including a female side) that pretty much runs away from any sort of brawny machismo. This isn’t a precise analogy, but Depp is basically a 21st Century Franchot Tone with a little perversity and eye shadow on the side.
I’m mentioning this because AICN ran some shots last weekend of Mann, Depp and others shooting a bank-robbery scene somewhere in Wisconsin. (It happened in Columbus, Madison, Baraboo…one of those.) And your first thought is that Depp and his tommy-gun-brandishing cohorts look like actors playing gangsters in their 1930s hats and overcoats. Unfair to judge from a few cheap-ass snaps, I realize, but that’s what they look like.
Public Enemies is an adaptation of Bryan Burrough‘s book,” which is about the gangsters who shot up the midwest in 1933 and ’34 — Dillinger, Bonnie and Clyde, Baby Face Nelson, Pretty Boy Floyd, Alvin Karpis and the Barker family. Mann’s film may be a full-on adaptation, although reports have so far suggested it’s mainly about the bloody and raucous crime career of Dillinger, which lasted a little less than 18 months (early ’33 until his death in July ’34). 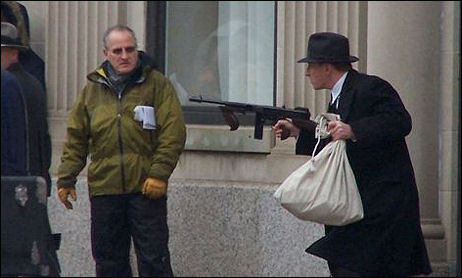