With George Clooney‘s Leatherheads opening on April 4th, I’m feeling a bit of an atmosphere going on. It’s like you’re at a game and the coach from the opposing team has called ‘time out’ and the whole team is huddling by the sidelines and you’re wondering “what, did somebody forget to study the plays?” I’ve been at this racket for nearly 30 years, and I know what a vibe of slight trepidation feels like. It’s as distinct as the smell of mustard as you walk by one of those hot-dog wagons in Manhattan. 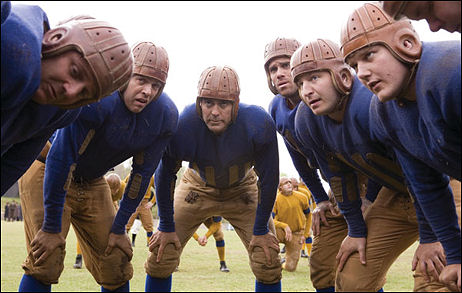 So I talked to a reputable guy who saw it last weekend at a junket screening, and his sum-up tag was “pretty bland.” Aww, come on!, I said. Don’t! Ease up! But the guy wouldn’t listen. “A few moments that make you smile, some that make you grimace,” he said. Jesus, man…stick it in and break it off.
“Most of the latter come courtesy of Renee Zellweger, miscast as the kind of Barbara Stanwyck dame that gives as good as she gets,” he said. “No Stanwyck she. Zellweger also isn’t aging particularly well, and I would imagine that this will be her swan song as a romantic lead.
“That said, director-star Clooney makes this cutesy, old-timey enterprise watchable,” he concluded. “But for a movie that is supposed to be about a bunch of eye-gouging, manly men, the last of a breed playing a game that’s about to leap into the big-time, Leatherheads is awfully polite. Too much so to work as anything but a niiiice valentine to a bygone era.”
When Universal decided early last October to bump Leatherheads out of its 12.7.07 slot and give it a 4.8.08 opening instead, I said to myself, “This might mean something.” But I didn’t want it to have problems because I’m as much of a Clooney kiss-ass as the next guy (i.e., like him, love his interview patter, admire his taste in movies as an actor-producer-director) and I wanted it to work so I put it out of my mind.
I could see from the trailer later on that Clooney was trying for some kind of 1930s semi-screwball vibe out of the Howard Hawks manual — Ball of Fire meets Knute Rockne, All-American, something like that.