“Given the nature of the material, which comes to a climax with half of London’s criminal and Secret Service personnel chasing the baffled thieves, you would expect The Bank Job to be played as farce, or perhaps as a satire on the manners of the upper class,” writes New Yorker critic David Denby. “That’s the way Richard Lester or the Boulting brothers would once have told such a story. 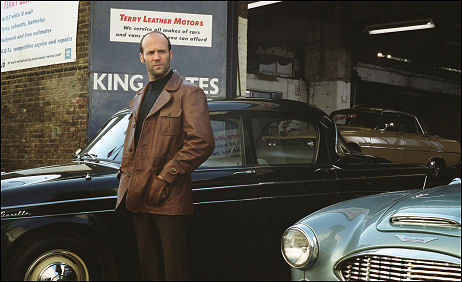 “But Roger Donaldson, the Australian-born director who, in recent years, has become the kind of solid pro that Hollywood developed in the nineteen-thirties and forties, has made a straightforward, tight-knit crime thriller, which incidentally features some very odd plot elements.
“Respecting the rules of the game, Donaldson assembles the robbery team (guys who work at a car dealership and other minor jobs) and gives us a brief account of their everyday lives; he lays out their loyalties to one another and to the upwardly bound model, with whom two of them had affairs many years earlier. The plot, which includes such intriguing minor characters as the porn king of Soho (played suavely by David Suchet, of Poirot fame), is terrifically complicated, so Donaldson moves things along briskly and refuses to dwell on violence (as an American movie would).
“The director has done his best to restore the civilized pleasures of the genre. There are a couple of mild movie jokes: the filmmakers cast the tall, darkly handsome Richard Lintern, who looks as if he had just missed out replacing Sean Connery as James Bond, as the chief MI5 agent. And Donaldson has got a star in the making: Jason Statham, as Terry Leather, the head of the robbery gang. Statham, who has been playing tough-guy roles with authority in the Transporter films, has clipped hair, burning eyes, and a voice that sounds like acid running over gravel.”