Borys Kit-Carl DiOrio wrote a story for last Thursday’s Hollywood Reporter about Ted Elliott and Terry Rossio being signed to write a Lone Ranger movie for producer Jerry Bruckheimer. The news about the project itself, however, was revealed almost a year ago by Collider‘s Steve Weintraub. 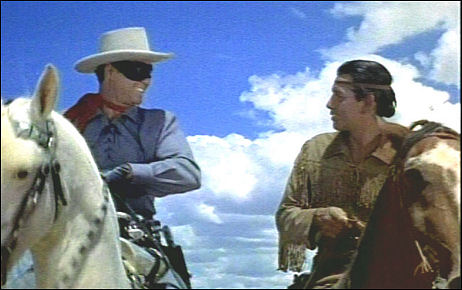 I wrote in response that the idea is “an obvious non-starter for the simple fact that westerns haven’t mattered for decades.” Open Range showed that one could make a good solid western that stood on its own two feet, but the genre lost its cultural vitality back in the ’60s. Boomers in their late 50s and 60s have a sentimental thing for the classic TV series with Clayton Moore and Jay Silverheels (“What you mean, we?”), but GenXers and GenYers, I would think, are completely uninvested. It just boils down to being a title that has a certain marketability because it’s vaguely “familiar” in the dead-head sense of that term.
The other thing I wrote is that If Bruckheimer is really and truly married to the idea of reviving a 1950s-era western, he should remake Shane.