Given the apparent likelihood of Steven Soderbergh‘s The Argentine and Guerilla playing at the Cannes Film Festival two months hence, here’s a condensed reposting of my impressions of Peter Buchman‘s scripts which I ran over a year ago. 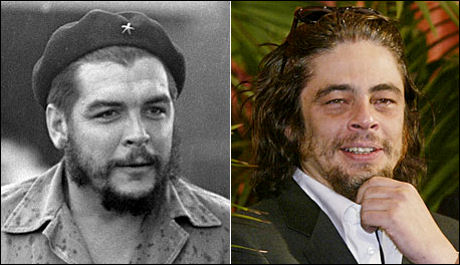 The scripts, both dated 10.4.06, are “awfully damn good — a pair of lean, gritty, you-are-there battle sagas, one about success and the other about failure. Together they comprise a strong and properly ambiguous whole.
“Obviously political and terse and rugged, they’re about how living outside the law and fighting a violent revolution feels and smells and chafes on a verite, chapter-by-chapter basis. They’re about sweat and guns and hunger and toughing it out…friendships, betrayals, exhaustion, shoot-outs and trudging through the jungle with a bad case of asthma. What it was, how it happened…the straight dope and no overt ‘drama.’
“If Soderbergh does right by what’s on the page, The Argentine and Guerilla (which Focus Features will apparent not distribute, I’m told — there’s talk about Warner Bros. stepping in) will have, at the very least, a Traffic-like impact.
“The films will almost certainly be Oscar contenders, and you have to figure that del Toro, playing a complex, conflicted hero who ends up dead (i.e. executed in a rural schoolhouse by a drunken Bolivian soldier), will be up for Best Actor. The Guevara role is too well written (nothing but choice, down- to-it dialogue from start to finish) and del Toro is too talented an actor — it can’t not happen. 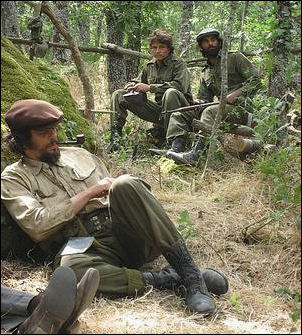 “In fact, I can easily imagine critics comparing Soderbergh’s two-part saga to Francis Coppola‘s The Godfather and The Godfather, Part II — not necessarily in terms of quality or emotional-impact issues but because they convey two distinct and disparate sides of Guevara’s saga, the up and the down, in the same way that Coppola’s films are about the youthful ascent and malignant, middle-aged descent of Al Pacino‘s Michael Corleone.
“Another analogy is the first half of Lawrence of Arabia vs. the second half.
“The Argentine is about Fidel Castro and Guevara’s forces leading their small anti-Batista army from their arrival on Cuban shores in 1956 until their victory in late ’58. Guerilla is about Guevara’s failed attempt to spark a subsequent revolution in Bolivia in 1967. The former is about struggle, strength and triumph, and Guerilla is its opposite number — the same fight minus the wind in the sails.”