Jack and Jill vs. The World is the worst movie title I’ve heard since the start of the 21st Century. It’s just awful — an AIM that goes right to the logic center of the brain and says, “Forget it.” This is no reflection of the film, of course, which Lantern Lane and Urbantone Media Group is opening on 4.11 (and screening for local press on 4.3). I’m not presuming anything but that title won’t step pecking me on the head like a crow. What could producer, director, co-writer and costar Vanessa Parise have been thinking? 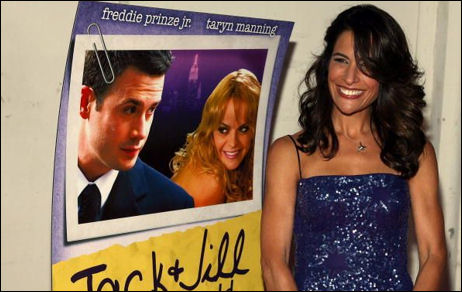 You could show this movie untitled to the three smartest marketing guys in the world and pay them to think up a title that would totally repel potential ticket buyers — a movie-title equivalent of Springtime for Hitler within the prism of The Producers — and I could imagine them coming up with titles that sound as bad as Jack and Jill vs. The World, but I can’t imagine them coming up with anything worse. It just says lame, contrived, forced, urban-eccentric, etc.
The film costars Freddie Prinze, Jr., Taryn Manning, Robert Forster, Vanessa Parise, Kelly Rowan and Peter Stebbings. It’s about a quirky-oddball romantic film about Jack, a youngish and “totally bored” Manhattan ad exec (Prinze) meeting and falling for Jill (Manning), a “fiery and adorable” type, etc. The plot has something to do with honesty and keeping secrets. It’s billed on the poster as “a love story for cynics.”
If it turns out that Jack and Jill vs. The World is sharp and amusing with a great ending…terrific. But if it turns out to be trouble of some kind (and I haven’t a thing to go on at this stage), no one will be able to say that they didn’t warn viewers in advance. You hear that title and you go “oh” and you just know.